I know I say this all the time, but this time I really mean it- I'm going to try and keep this brief, because Sunday's kind of nearly over here! I realise that I don't have to do a Sunday Sundries post, but a little consistency isn't a bad thing, amiright? I am.

SO! This week was good, kind of middleish in the middle (a cancelled trip to see Batman genuinely made me feel miserable for two days, which is probably not a great indication of my emotional state) but on the whole actually really nice. And the main reason for this, and something I should definitely remember, is because I got out of the house! And did things not in my bedroom! (ooer!) But seriously- I went places and met people and it was all nice and good, and I need to remember that doing such things are nice and good so that I do them more often. Yes. *Nods definitively*

Getting out more also meant experiencing Olympic transport, which was DREADFUL (sample conversation: "Oooh, a field! It's like the opening ceremony!" Yes, OR you're a twat who needs to get out of London more) and then less dreadful but awfully sweaty smelling. So yeah, it's kind of put me off public transport for the next week, and made me grumpy about the Olympics for the combined time of about half an hour- other than that it's been all 'YESSSSS gymnastics!' and 'OMG that body!' and also, the birth of a new crush on this swimming GOD: 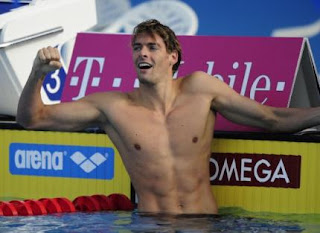 Ahem. So, Olympics+going places=not all that much reading, which is bad because the things I have to read! They are numerous and exciting! (by 'have to' I don't mean that I have to do it, but that I have them! And I want to read them! But I'm failing to make proper time!) I finally, finally found an affordable copy of We Need To Talk About Kevin (i.e. a charity shop copy) on Friday, and I'm dying to read it, and then I need to read my first section of The Moonstone for discussies on Wednesday, but ALSO the wondrous Ellie sent me Let's Pretend This Never Happened (RAK, people, look into it!) and I really really really desperately want to read that! So really I'm in the most wonderful reading position cause I really really want to read all these things, it's just... How to prioritise?! I just don't know!

But, if that's as big as problems get at the moment, then I'm ok with that.

Ok, my loved blog this week is totally new and so doesn't really have many posts to its name, BUT I can already tell it's going to be GREAT! You've probably all seen it already, but if not, it's the new Classics Club blog! I know it's going to be good because I love basically all of the moderators' blogs, and also because it seems like a really great way for everyone to interact and see each others posts, and also, a monthly classics meme? Don't mind if I do! Basically I'm really excited about it, and I want everyone else to be too!

P.S. I forgot to add, clearly the BEST thing that happened to me this week, which was winning an Amazon voucher from Sarah! Apparently I'm super ungrateful to not have mentioned it in the main text, but I am really really grateful and excited about it! Expect a 'this is what I bought with it' post, when I figure out exactly what these things are...
Posted by Laura at 21:25