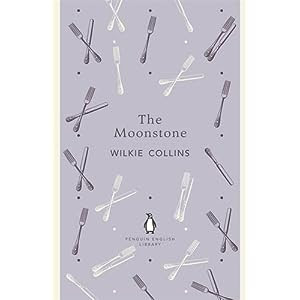 OH MY GOD, the end of this section!! Rachel SAW Franklin doing it, but he has no memory of it?! I'm thinking secret twins or doppelgangers or intense plastic surgery... You know, all the normal things. And also, I've been doing this a lot, of course:

Just to back up a teeny bit though, I've come to the reluctant conclusion that Rosanna might ACTUALLY be dead, and, well, I'm pretty sad about it, actually. It seems to me that Rosanna is The Moonstone's Anne Catherick (or Anne is The Woman in White's Rosanna... Which was published first again?) in that their deaths came with little fanfare and no one was that bothered about them. Still, Rosanna had Betteredge to cry for her, and Anne had her companion lady, so... There's that at least. But also I CAN'T BELIEVE SHE'S ACTUALLY DEAD! What the hell, Wilkie? I did so love her little unrequited love thing for Franklin though, and also the fact that Penelope was right about this as she has seemed to be about everything. Could PENELOPE be the secret mastermind behind everything? I think yes.

And now to go back even further, how awesome was the rest of Clack's section? Last week, Alice and I decided that Clack kissing Godfrey's hand was her first and only sexual experience, and I think in this part she had her second:


"I have an indistinct remembrance that he was very affectionate. I don't think he put his arm around my waist to support me- but I am not sure. I was quite helpless, and his ways with ladies were very endearing."

I mean, OBViously Clack is desperately in love with him, but did anyone else pick up on the bit where she said that she forgives him and still loves him or whatever it was? Is he dead, or does he have a secret Franklin mask, and so took the moonstone? (I don't really think he took it. BUT I JUST DON'T KNOW!)

I think Clack's fall from grace was perfect though, because as it turns out, telling your patroness that you tried to stress her mother out just before she died? Probably not the best idea. Sad as I am to see her go, she did leave us with some more wonderful wonderful things to remember her by, so we all know that she's very very ill-used and underappreciated. And also a terrible person: "In those words the invitation was given, and the glorious prospect of interference was opened before me."

I don't really have much to say about the lawyer section, other than that I like him because he dislikes Godfrey (and I feel exactly the same way about Mr Murthwaite now) but also, how lowwww is Godfrey?! 'Oh please marry me dear Rachel because I need all your money' but hey, nice work Lady V in making sure no evil man could take all her money. I think that's what happened, right? Oh yeah, and there was also the thing with the Indians, which excites me not all that much because they clearly didn't take it, and clearly still want it, and frankly I think they should have it because it really belongs to them, so... Yeah.

But anyway. What do we think about Franklin?! If he did it then he's clearly hiding it, even from himself, and definitely from the reader. I enjoy the fact that Betteredge got to be a detective again, and frankly, if he's the one to solve the whole thing, I'd be really happy. Is Rachel maybe lying about seeing Franklin because she actually took it? I don't think she is, because all her actions suggest that that's what she really believes. So maybe she was just dreaming? I JUST DON'T KNOW. I'm like this:

And also, I am DYING to find out. I'm so happy that this week's is the last section (except, only one more readalong week, SADFACE) because I need to know or I am going to EXPLODE. Not even an exaggeration.
Posted by Laura at 07:59