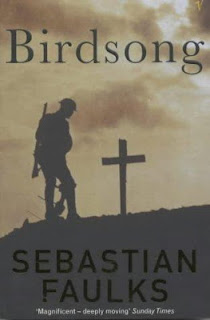 I think I was predisposed to dislike Birdsong. I mean, it's kind of the book on my TBR Challenge list that I've been looking at all year and going 'not Birdsong', and frankly, I probably would have gotten rid of it when I got rid of loads of other books had it not been on that list. Interestingly, I'm not like 'Oh MAN, I HATE that challenge for making me read this', but also I'm not like 'This is the greatest book I've ever read and everyone MUST read it.' I'm just... Fine with having read it, and fine with never reading it again.

I mean... It's ostensibly a WWI book, which you guys know I'm never going to love, and then there's the fact that I kind of think of Faulks as a pervy old man when he writes a sex scene, and there was also this whole bit set in 'the future' where something from the past was tied up, and Faulks showed that he's really not good at writing a modern (ok, 1978, but that's modern, right?!) female character. I mean, honestly, I was a little embarrassed for him in these chapters, I can't lie. PLUS, he's really good at using his characters as a mouthpiece, which isn't something I normally even pick up on but it was so blatant in Birdsong that I was a little bit astonished, and like 'Oh really? He'd say that, would he? NO HE WOULDN'T, THAT'S A THOUGHT FROM YOU!"

And then there was all the shouting in my brain every time the sentence 'he could hear the birds singing' or any variation on that was used. And trust me, it was used A LOT. There was much eye-rolling and sighing. Because firstly, how much do birds actually sing when it's not, you know, morning; and secondly, how much do you notice it when they do, and thirdly I KNOW YOUR FUCKING BOOK IS CALLED BIRDSONG, STOP THROWING IT IN MY FACE ALL THE TIME.

But apart from that, it wasn't quite as bad as I was expecting. But it's still not as amazing as these people seem to think it was:

"Ambitious, outrageous, poignant, sleep-disturbing, Birdsong is not a perfect novel- just a great one." SIMON SCHAMA, New Yorker
Well, at least he said it isn't perfect. As for all the other stuff... Meh. And I really don't know where he got outrageous from. Must have run out of adjectives.

"One of the finest novels of the last 40 years." BRIAN MASTERS, Mail on Sunday
Nope. Since 1953? I'm sure there are many finer books. At least I hope so...

"This is literature at its very best: a book with the power to reveal the unimagined, so that one's life is set in a changed context. I urge you to read it." NIGEL WATTS, Time Out
I understand what Nigel is saying, but it seems to me like he basically doesn't live in the same world as me- I feel like every November we're asked to relive the First World War, and we do, and it's not nice, and I don't think Faulks' novel has made it any clearer to me because hey- he wasn't there either. Plus the end is really non-believable, although if something similar to it did actually happen, then my little heart would be warmed by it VERY much.

Birdsong might be a very good book written about the First World War, but that was never going to be my favourite thing. It was ok but not great, it was not stirringly erotic, and Faulks doesn't care for his female characters much, or at least not enough to give them proper personalities and things. And I wish for "I KNOW YOUR FUCKING BOOK IS CALLED BIRDSONG, STOP THROWING IT IN MY FACE ALL THE TIME." to be used on the blurb of the next edition of this, just as a warning to people like me. Because that really was bloody annoying.
Posted by Laura at 08:00