Sunday Sundries: It was CHRISTMAS and now it isn't

Hey, so, does everyone remember CHRISTMAS?! That was good, wasn't it? And now we're in that weird time between Christmas and New Year where it feels wrong to actually do anything, but not doing anything after THE MOST EXCITEMENT (I mean, not as much excitement as I had when I was a kid, but still- I was pretty excited!) feels kind of dismal, so basically, since Thursday, I've just been eating.

I'll be wearing dresses until this whole eating thing blows over.

Do you want to see the books I got for Christmas though? I know you do! 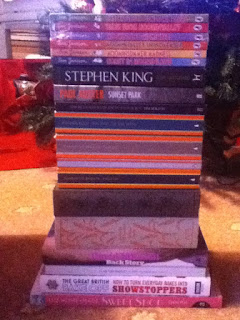 Isn't that basically the blurriest picture you've ever seen?! It got dark really early on Thursday (the day after Boxing Day, OR the present sorting out day, if you live in my house) and I wanted to get the books put away, so this is the photo I got. At least the Christmas tree is in the background, right?! Anyway... Allow me to list them for you too!
Set of Moomin books by Tove Jansson
On Writing by Stephen King (I finally own it, Alley!)
Sunset Park by Paul Auster
The Melancholy Tale of Oyster Boy and Other Stories by Tim Burton
The Mill on the Floss by George Eliot
Shirley by Charlotte Bronte
Frankenstein by Mary Shelley
Villette by Charlotte Bronte
Dracula by Bram Stoker
Tess of the D'Urbervilles by Thomas Hardy
Back Story by David Mitchell
And then also at the bottom are a couple of cookbooks and a crafty book about making animal hats, about which I am disturbingly excited.

BOOKS! And I also got a sewing machine that I'm scared of, and some other stuff and things too. And about a million pairs of socks, as always. Could have stacked them in a pile and taken a picture too, but, you know, we all have our limits.

SO. That was Christmas and it was nice. And now, as I guess we all are, I'm looking ahead to the new year and just thinking about what I'd like to be different, what I'd like to change; which is a state of mind that, I think, leads to dissatisfaction with one's current life. Which is something I try to avoid, because if I look too closely at my life (living with my parents, sharing a freaking bedroom, not having a full time job, no money... and so on) I'm bound to see the things that are wrong with it rather than the things that are good, and the things that I've done this year in particular.

Like, you know, looking after my mum when she needed me too, like I did for the majority of this year, that wasn't nothing. And finally, finally stopping eating meat after sort-of-kind-of trying to do it for so long. And getting a job, even though it is a part time one. All of these things are actual things, and not nothing, and I need to remember that, rather than going 'well, this is wrong and I hate this and everything is awful.' Because it isn't. Apart from sometimes.

This is the bit where I suppose I should do some resolutions or something, but I don't really wanna because hello, setting oneself up for a fall! Plus, I still have ongoing goals or whatever that I set on my birthday and I'm doing pretty well with them, so... Might as well just keep going! But I sort of have two resolutions that I really... not even want, but need to do, and those are


And that's about it, really. Or at least those are the achievable things that I want to do, as opposed to the things that I would like to happen but completely don't have enough money for. Do you have any resolutions? And hey- Happy nearly new year to you!
Posted by Laura at 11:40