Sunday Sundries: This post is basically going to be all about doughnuts

Hello my little ones! And how has everyone's week been? I am happy because I got to walk to work almost every day this week (I worked all day on Friday and I am NOT leaving the house at 8.30am just to walk, are you crazy?) which makes me feel all nice and exercised. The actual walking may not have been all that pleasant (I'm not kidding when I say I nearly got blown over. We've had some INTENSE winds) but it makes me feel good and I like it. (I realise that sentence feels like it needs a 'so there!' on the end of it, and that's because some people at work on Friday were like 'OMG you walk to work? WHY?!' and I'm just like, um, exercise? Anyway...)

So that was good. Now let's talk about doughnuts! So, Tuesday was one of my colleagues' birthdays, and because she's lovely she brought in doughnuts so we could, you know, consume calories in honour of her birth. And it wasn't until I was stuffing it into my mouth that I realised two things:

2. I haven't had a doughnut since I made them back in like, what? August? (Yep, August)

These are astonishing realisations, I know (a human being who likes doughnuts? What an anomaly!) but the thing was that this doughnut was really good I think purely because I hadn't had one in so long. So, essentially, I'm now thinking that delayed gratification might be the way to go with food that is really bad for you but that you really like, because honestly, I'm not sure I can remember a time when I enjoyed a doughnut more.

A regular doughnut, that is. Because I got so much pleasure from the Nutella doughnuts that it was almost obscene. The love between a woman and her doughnuts...

Anyway. I realise this isn't exactly groundbreaking since I assume we all know about delayed gratification, but I don't know, I feel like this is the first time I've really been without something for SO long, and then have suddenly been overwhelmed with how good it is. And I feel like I should probably do it with other things too, just so they suddenly taste so so good again. The only other way this happens (according to Fight Club, anyway) is having a near death experience, and I'd rather not have one of those k? Thanks.

The doughnut rabbit hole I fell down also meant that I remembered I hadn't had a Krispy Kreme for a really really really long time either, and so yesterday I also had to have one of them because I remembered and also I had to do the shopping because my mum hasn't been well this week (I thought we were over this! But apparently not.) and there were Krispy Kremes there and well. I had to have one, obviously. I'm not going to go on about how good it was (it was really good. Chocolate cream AND jam inside. The best.) BUT look at what I found on the bag I got it in: 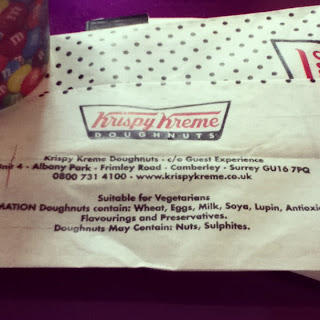 Harry Potter is everything, and everything is Harry Potter. Even doughnuts, apparently.
Posted by Laura at 08:00