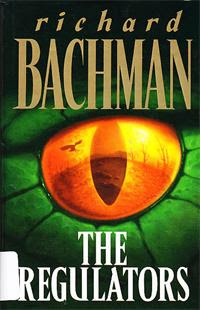 Ugh, The Regulators. I have a lot of problems with this book, but the main one is that it's not Desperation- which, I realise, seems like an unfair thing to say, but it's not when you know that The Regulators is connected to Desperation in the vaguest possible worlds-running-alongside-each-other way, and then this statement seems slightly saner. The Regulators isn't all bad, but in the end, for me, the bad always ends up outweighing the good.

So. The Regulators has the same villain as Desperation, albeit in a different manifestation, and all of the main characters of Desperation show up in one form or another. This time the setting is suburban Ohio rather than the Nevada desert, and everything is kind of the same but also a bit different. And a lot of these slight changes, instead of intriguing and delighting me, kind of piss me off- the Carver family from Desperation are still there, for instance, but the parents have the names of the kids, and the kids have the parents' names, and it just feels, firstly a bit creepy (marrying siblings, King? Really?) but then after that's worn off, just kind of pointless and silly and just annoying?

There are also a few events from Desperation that are repeated almost step-for-step, and the original villain of Desperation gets to be a good guy, which is a little unnerving, but mostly I can deal with it. But then there are also characters (Cynthia and Steve, for example) who are pretty much exactly the same, and it's just like... WHY ARE YOU DOING THIS, I DON'T UNDERSTAND! The manifestations of the supervillain (Tak) are so stupid that I don't even want to talk about them, so I won't.

Really, it mainly feels like King wrote The Regulators as 'Johnny Marinville's redemption'. In Desperation, Marinville is this terrible, egotistical bastard who doesn't want to help anyone and he's also disgustingly misogynistic. In The Regulators? He's pretty much the hero- he's the one who even gets close to figuring out what's happening, he puts himself in danger to save others, and instead of being misogynistic, he protects one of his neighbours from the racism of another. It's made pretty clear that he has the same past as 'the other Johnny' (who I can't help but think of as the proper Johnny) but at a certain point he made choices that the other one didn't make, and that made him a better person.

All of which is very interesting from an infinite universes point of view, but... Johnny's an arsehole. And I can't get past that, probably because Desperation is the better book.

For the sake of complete fairness: If I'd read The Regulators before Desperation (and I'm talking a long time ago- Desperation was quite an early King book for me) I think I'd have a much fairer view of it and might even see it as the definitive story. But I didn't. And I know it's stupid to think of either one as 'the definitive story', but that's the choice King made by calling characters by the same names and drawing annoying connections between the two, and so I make my choice too. I think it was an interesting idea that doesn't really work in practice, because reading one kind of makes you irritated by the other. Or at least that's what it did to me. Nice work, King.