Before I started this here blog, I read and bought books really differently. Whereas now I'm all about reading the books that other bloggy people have read because, you know, they're awesome and almost always right about such things, before I was pretty much on my own. Which tended to mean sticking to authors I knew I was going to like*, and buying up any books of theirs I could find, the evidence of which still stands in my unread books list.

And that's where Paul Auster comes in. He's maybe the author that I have the most books by that I haven't actually read. It's weird, because whenever I read a book by him, I LOVE it, but somehow there always seems to be something I want to read more than a Paul Auster book. Maybe it's because I'm too lazy to deal with his mindfuckery (there is a fair bit of mindfuckery. Which in the end, I always LOVE, but when I THINK about it, it's like meh. Effort.) or maybe it's because, you know, I own too many books, but somehow, poor Auster gets sidelined all the time.

But! In the past two weeks, I've read 2 books by him. Which is something else that I haven't really done since I started blogging, because I tend to prefer spreading out books by different authors because, you know, what if people get boooored? (I care about this a lot less now. Evidently.) But, I wanted to read Man in the Dark since it was mentioned in Tolstoy and the Purple Chair (and I already owned it) and then The Book Jar told me to read Timbuktu, which is the Auster book I've had the longest. Which is a weight off my shoulders in just having read it!

Since both of these books are pretty short, and this post is already kind of long (I'm so sorry! I'm just rambling!) I'mma mini-review these suckers for you, but I feel like I should make a point first. And I guess the point is... It's really great branching out, and reading lots of different authors and styles and things all the time, but also it's sometimes nice to return to an author you know you love, and who does what he does, and does it well, without having to worry about, like, reviewing two sort-of-similar-only-not-really books really close together. Because, you know, that's the point of reading anyway, isn't it? Just doing whatever you want? Yes, it is.

Man in the Dark 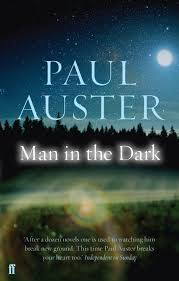 "She held my hand when Oona left me, applauded when Sonia and I got back together, saw her son whenever he and his wife flew in from Chicago, attended family events, watched television from morning to night, could still tell a decent joke when the spirit moved her, and turned into the saddest person I have ever known."

If Man in the Dark and Timbuktu have anything in common, it's that they're both fairly basic for Auster books. There's very little meta-fiction, few connections with other works, and he keeps things fairly straightforward (for him). All this does is make them more powerful- considering how short Man in the Dark is, and how long ago I read it (a couple of weeks is a long time, people!) a lot of it has stayed with me, which isn't something I can always say about books.

Man in the Dark all takes place in one man's head over the course of one night, and it's kind of about the stories we tell ourselves to stop thinking about the things that have happened to us. I'm pretty sure everyone does it, and if not then I guess we all use books to achieve the same effect, and I don't know if Auster is saying this is a good or bad thing, but maybe it's just a way to get through another night. There's definitely an opportunity for Austerian weirdness in the book, and whilst I definitely thought things were heading that way, in the end I was kind of glad they didn't- that the story really was just a story, and that real life ended up being more important. 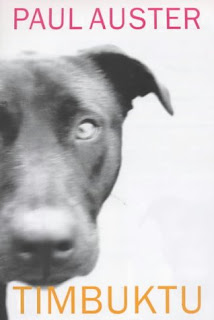 "He pitied him for not knowing how to enjoy life. The world was filled with such wonders, and it was a sad state of affairs when a man spent his time worrying about the wrong things."

There's a reason Timbuktu was my longest unread Auster, and that's because it's narrated by a dog. Narrated is actually the wrong word, but it's all about a dog's eye view of the world, and so whilst I bought this because Auster's name was on the cover, I wasn't sure when I'd actually read it because that's kind of a premise that doesn't appeal to me much. Thank goodness for The Book Jar, is all I can say, because without that, Timbuktu might have been sitting on the shelf FOREVER.

Which it wouldn't have deserved. Because, and this is such a rare thing, I didn't even roll my eyes ONCE at this book. It didn't hurt that the dog in question (Mr. Bones) was kind of hyper-intelligent, so following him wasn't stupid or dumbing down, it was just... This is how this creature sees the world, and these are his experiences. It also didn't hurt that this book is kind of a chronicle of different kind of dog ownership, and also just ways of living- the devoted homeless guy, the kid-who-isn't-allowed-pets, the 'perfect' Suburban family- all experienced from the dog's point of view rather than the humans'. Mr. Bones is smarter than a lot of the humans in the book, and knows what he wants better than all of them, and yet, everyone who is kind to him, he loves in his own way.

Timbuktu is also probably THE most straightforward Auster book I've read, and I think that's because it doesn't need to be anything more- Auster is showing you the world from a wholly different perspective, and doesn't need any narrative tricks cleverer than that. It's not a hyper-realistic account of a dog's life, of course, but it feels about right anyway, and most importantly, it sucked me right in. And that's kind of enough.

So. This Paul Auster fellow is pretty good. You might want to give him a try sometime.

*I'm still alllll about reading everything by certain authors. And with music, I'm definitely more likely to get ALL of certain artists' music than constantly wanting to find new artists to listen to all the time.
Posted by Laura at 08:00