"'You have shown bravery beyond anything I could have expected of you.'"

Oh, Goblet of Fire. You just tootle along all happily, don't you, everything's all challengey and, let's face it, it's all fun and games until someone replaces the Triwizard Tournament Trophy with a portkey and a lovely teenager dies. And then the COPIOUS WEEPING begins.

So heightened were my tear glands in anticipation for the sadness, that I started crying before there was even a hint of danger- when Harry was told that the families had arrived to watch the final task, and was all grumpy about going into a room where he'd be the one without family, but then realising that Mrs Weasley and Bill were there for him? SO WONDERFUL I CAN'T EVEN! And, if I'm honest, the crying could have started before that, even, when we found out what happened to poor Neville's parents, and Harry's lovely lovely empathy for him.


"He often got sympathy from strangers for being an orphan, but as he listened to Neville's snores, he thought that Neville deserved it more than he did."

Now. I've read this before, obviously, so I knew what was coming, but as it turns out, I only really vaguely knew what was coming. This meant that I was completely on the edge of my seat at the new rising of Lord V, but before that, I was a little pissed off. And what I was pissed off at was how little attention was paid to Cedric's death- he was just standing there, and then he was on the ground and then we were straight back to Harry. I think for the first time, I was like, fuck your fucking Harry filter.

BUT. I get it. I totalllly get it now. It's like... Of course we're following Harry, like we always follow Harry, and the thing is, he's in a crisis situation where things just keep happening one after the other and there's no time to process anything. It's all tense, and frightening, and so so so effective that it's unreal.

But then when everything's over (and I mean everything, Mad Eye Moody revelations and all) there's time, and there's reflection, and there's mourning for Cedric- mourning by an entire school, mourning by Harry, because really, he's an excellent person, and mourning from us too. Just because our mourning happens via Harry, that doesn't make it any less effective- in fact, it really makes it more effective because Harry's our guy, and we really really care about what happens to him. If he cries, we cry. And boy, did I cry!

I don't even think I could pick a saddest part of this last section, but I think it's a toss up between

All of those are bad enough, but the ACTUAL saddest part?

"He had no memory of ever being hugged like this, as though by a mother. The full weight of everything he had seen that night seemed to fall in upon him as Mrs Weasley held him to her. His mother's face, his father's voice, the sight of Cedric dead on the ground all started spinning in his head until he could hardly bear it, until he was screwing up his face against the howl of misery fighting to get out of him." 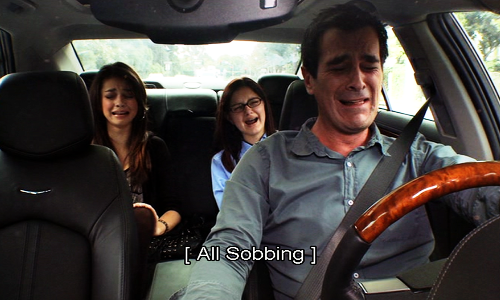 I had some other political Fudgy thoughts (Mmmmm, Fudge, being the main one) but basically, the last quarter of The Goblet of Fire UNDID me and I haven't quite been the same for a week. And I've just relived it again. I have to go and lay down now.