50 Shades of Grey is actually not bad...

As some savvy readers have noted in the comments, this is in fact an April Fool's Day joke and not, you know, evidence that I should be sectioned. Having said that, I still haven't read these books, so there's always time for me to ACTUALLY secretly like them... 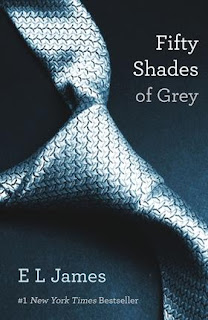 I've been harbouring a dirty little secret for a while now and I feel like today's the day to let it out to the world- I read 50 Shades of Grey (and the rest...) and I actually kind of... Liked it?

I know. I KNOW. This was the last thing I was expecting too, and yet... The books, certain gross sex scenes aside, actually make up a love story for the ages- the sexually advanced, yet emotionally disturbed billionaire and the young innocent (poor) woman who finally, eventually, saves him, because in the end he wants to be saved. It's lovely, really, and I'm really glad I overcame my prejudices and finally read it.

As for the sex... I can't pretend that some of it isn't gross (we've all heard about the tampon bit, right? I'm never going to find that hot, I'm sorry) but it's not as extreme as it's reported to be either, which, for a certain kind of temperament, makes it kind of hot. You know, in places. Sometimes. Ahem. BUT anyway, the point is hey, it's not so bad, and if bored housewives want to use it to spice up their sex lives then they definitely should. Yep.

I think we're all aware of my feministic feminismness, and I think 50 Shades has gotten a lot of press (I mean, I say press, I really mean internet criticism- the mainstream media is just like 'ZOMG PEOPLE ARE READING!') about how very sexist it is. And... I don't know, you guys! I mean, Christian has power because he has money, but Ana has power over his EMOTIONS, which means she has the power over him (and his money and everything) and she really seems to be in control a lot of the time. So, you know, that's pretty cool, and definitely not what I was expecting. I guess because we're in her head, we know that she knows what she's doing, even if it might not seem that way on the outside. What a smart cookie.

So, my inner goddess is alarmed and thrilled about 50 Shades of Grey. They're worth a read because, even if you think you're not going to like them, I think it's easy to find something in them that rings true for everyone. Um... Is is too soon to read them again?
Posted by Laura at 10:31