I gots some things... 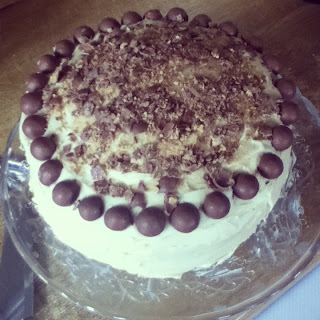 It was my birthday! It was totally the funnest. And I got some books, if you can even believe it! And now I'm going to show them to you and you'll love it because SHINY NEW BOOKS!

I say this all the time, but I really really didn't expect to get friends out of blogging (admiring commenters, sure! But ACTUAL friends? No way.) and even when I did have blog friends, I definitely didn't expect those friendships to hop off the screen and through my letterbox, delivering real presents I could hold in my hands. It's RIDICULOUS, and AMAZING, and the best possible reminder that you should always take the risk and do something, because you never know what might happen. BOOKS might happen!

And, books did happen on Tuesday. I guess this post is going to be kind of a showing off/thank you sort of thing, so I'm probably going to be really really nice about various people on the internets, so you should probably look away now if you don't want to be a part of that shit. I mean, seriously. It's going to enter gushing territory, I should think. (Not in THAT way. You pervert.) OK? Are you ready? I know I am. 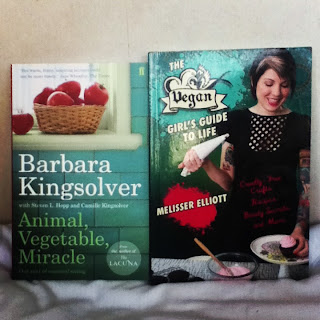 Firstly (and these are in no particular order, I should add) I got Animal, Vegetable, Miracle by Barbara Kingsolver and The Vegan Girl's Guide to Life by Melisser Elliott from the ever-so-lovely Bex, and obviously I am INCREDIBLY excited about them both because AVM seems to be all about getting back to nature and eating things you only grow yourself and things, and OBVIOUSLY I need a vegan guide to life because who doesn't?! But these are both very Things I Think About A Lot-esque, and so I'm clearly going to eat them right up (gettit? Cause they both involve food! No?) 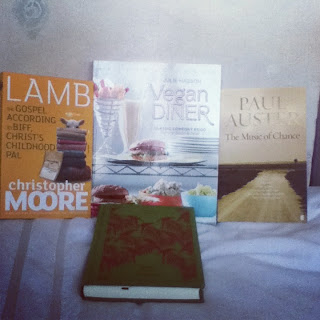 And then... Miss Ellie COMPLETELY outdid herself and blew me away with FOUR books (Bad Ellie! But also, so so good Ellie...) and I'm RIDICULOUSLY excited about all of them. To continue with the good eating theme, there's this Vegan Diner book which I am both excited and intrigued by because there is a MILKSHAKE on the front, and how can such a glorious thing (a vegan milkshake) be?! Also I REALLY need to learn how to make good veggie burgers, so... Yesssss book! And then also there's Lamb by Christopher Moore, which has to be good because Alley says so, and CLEARLY she's always right. Annnd there's a Paul Auster book, which is always, ALWAYS the right choice as a book to buy me (that's The Music of Chance, just in case you can't read the title) and then, also, can we all see that Penguin Clothbound Classic? Ohhh yes, she sent me that too. That's Treasure Island by Robert Louis Stevenson and it's got a very awesome cover. LOOKIT THE BOOKS!!
(Also Ellie wrote hilarious and lovely notes to go with each of them. So that's clearly awesome.) 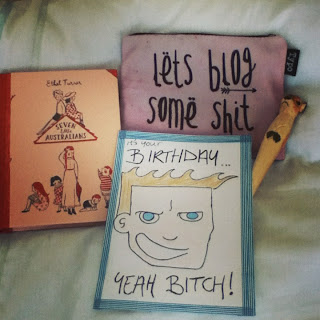 Kayleigh really really outdid herself with her package (all the way from Australia, I should add!) and each new item I pulled out maaay have involved some squealing! So firstly there's THAT CARD, which isn't her calling me a bitch but rather the AWESOMEST CARD IN THE WORLD because hello, Breaking Bad card! I mean, who else sent me a Breaking Bad card? That was no one (I should add that the whole cornerstone of our friendship is Breaking Bad. So this makes perfect sense!) And then there's a kangaroo pen (!) that looks like it should be a nightmare to write with, but its actually really good, a pencilcase that I'm currently using to hold my Kindle and is pretty much the best pencilcase I've ever owned (Let's blog some shit? Yeah, let's!) Aaaaand a book. Obviously. It is Seven Little Australians by Ethel Turner and according to Kayleigh, it's a bit Little Women-esque, only also very Australian and also she makes Ethel Turner sound like a badass. Translation: I can't wait to read it. Obviously. There was also this: 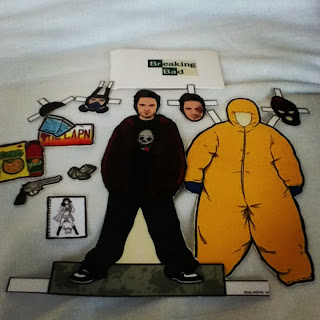 A JESSE PINKMAN PAPER DOLL KIT! Obviously I'm just going to be playing with it all the time. But I never even suspected that such a wonderful thing existed! JUST LOOK AT IT! I should probably get over it, but I never will because it's amazing.

Anyway. I opened all of these presents and was all overwhelmed and happy and everything was cool and it was my birthday and I had a croissant for breakfast and THEN the post came and I had ANOTHER parcel and it was amazing. And obviously you're going to want to see what was inside it, so... 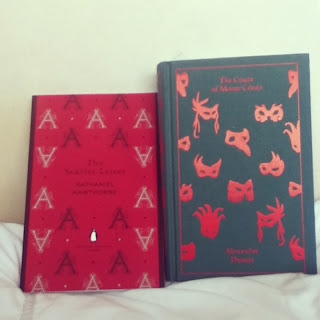 Instagram was not my friend with photographing these presents... But anyway! These are from the wonderful Hanna, and eeeeeeee look, another Penguin Clothbound Classic! Be still, my heart! That'll be The Count of Monte Cristo by Alexandre Dumas and look how pretty it is! (I'm going to keep pointing out its beauty to hide the fact that I don't know much about it. BUT I WILL WHEN I READ IT, WON'T I?!) And the other is The Scarlet Letter by Nathaniel Hawthorne which I DO know a lot about (I believe I wrote an essay on it once... Maybe...) and look how pretty it also is! And also very necessary because I got rid of my other copy just to make room for the eventual purchase of this one. And look! The lovely Hanna got it for me so I didn't have to! AMAZING!

Hopefully you're reading this now and thinking 'hey, I should get into this blogging malarkey for the swag', and you know what? It is AWESOME, but also, even better than the stuff is the PEOPLE, and how else would we ever have met? Exactly. The internet is magic.

I realise this post has been THE LONGEST already, but if you'll allow me, I'll juuuust quickly show you the books I got from family type people (I KNOW): 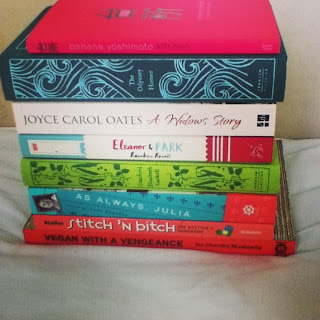 Which, from bottom to top are:
Vegan with a Vengeance by Isa Chandra Moskowitz (Yes, I need to learn how to make ALL THE VEGAN FOOD. Problem?)
Stitch 'N Bitch by Debbie Stoller
As Always, Julia- The Letters of Julia Child and Avis De Soto (Books of letters!!)
Cranford by Elizabeth Gaskell (More PCCs, natch.)
Eleanor and Park by Rainbow Rowell (How I haven't dived headfirst into this already is a complete mystery to me. I think I'm saving it for when I can give it a whole day of my time.)
A Widow's Story by Joyce Carol Oates
The Odyssey by Homer
Kitchen by Banana Yoshimoto (I opened it and I swear my whole family thought it was written in Japanese. I was like 'it's called Kitchen' and my nan was all like 'how do you know that?!' and I had to explain that there wasn't just a character on it, it was written on the front in English too! OH DEAR)

So, whilst I still haven't broken my book buying ban (I know! Still! A whole day over and I'm fine!) lookit all the new books I have to get all excited about! I can't even tell you which I'm MOST excited about, because the answer is ALL OF THEM. And as if that wasn't enough books, there was also this: 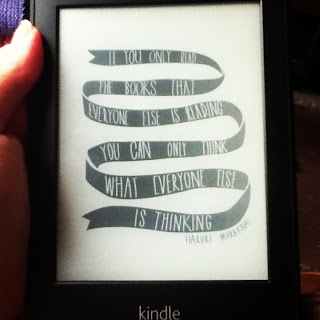 Oh yeah, that's right, I got a Kindle. It shows me this Murakami quote while it's resting, and I feel like it KNOWS me already. Which, if you really think about it, is kind of a bit creepy... But anyway, I've already read a whole book on it (!) and so far I actually like it quite a lot- I was worried about the medium being distracting, but, so far so good! (This will definitely be discussed at great length later. I can tell.) I can already see impulse buying books being a problem on it (since... I kind of did it already today...) so I'm just going to have to monitor myself before ALL MY MONEY IS GONE. Which hopefully won't happen. I've been thinking of giving it a name to make it more friendly and also because other people on the internet have named their e-readers, so... Any suggestions?

Finalement, I just want to say a massive THANK YOU- to the present senders, of course, because you are magical, but also to everyone who Happy Birthday-ed me on twitter, or instagram, or in a blog comment, or on Facebook because there's nothing quite like looking at your various screens on your birthday and knowing that someone was thinking of you. So thank you all. You're all fab.
Posted by Laura at 08:00

Email ThisBlogThis!Share to TwitterShare to FacebookShare to Pinterest
Labels: And now I won't mention it again for a whole year- PROMISE