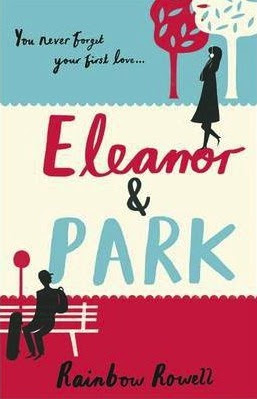 "He tried to remember how this happened- how she went from someone he'd never met to the only one who mattered."

I finished Eleanor and Park abouuut a month ago now, and I finished it on the day I started it (it was a 24 hour readathon day, admittedly, but I feel like I wouldn't have been able to spread it out much further if it hadn't been). Ever since then, I've had a weird review paralysis about it, which I put down to two things:


So yeah. I don't read a lot of YA, but I do and will pretty much always read anything Rainbow Rowell writes because she's kind of magic. Attachments was SPECTACULAR, and Eleanor and Park was no different- the characters feel so real and also wonderful (but not PERFECT, because that would be dull), the relationship between Eleanor and Park, which the book pretty much hangs on, feels, if not real (no boy ever shared his comics with ME on the school bus [I never took the school bus...]) so so sweet and lovely and imperfectly perfect that I just wanted to keep reading about it all night long.

Which, I pretty much did! And then I ran out of pages and I was sad and THAT is how I ended the 24 hour readalong because I couldn't even face reading something else after that. And I don't know if this means I should read more YA, or if it just reconfirms that I LOVE RAINBOW ROWELL, but either way, I was very strongly infatuated with this book for a quite a few hours. And I guess I kind of still am a bit now.

And now! To cover up the fact that this has barely been a review at all, I'm just going to talk about A Thing that I really really enjoyed from Eleanor and Park. Because, you see, while I'm really fond of Park,  I was kind of in love with Eleanor- she's the kind of person who sticks out, and instead of trying to blend in, she kind of embraces the fact that she doesn't. Which doesn't mean that she WANTS to stick out, but since she does, she doesn't spend her time just trying to fit in, she just goes with it. This is basically all I need to like a character, and just a person in life, generally.

There's this one point in the book where Park's mother (who is a hairdresser and general beauty-person)  is desperate to give Eleanor a makeover, and Eleanor is pretty reticent about it. And during this, Park's mother asks her why she doesn't wear makeup, and Eleanor thinks (but doesn't say, because she's not an idiot) 'Because makeup is a lie.' And I was like... Wow. And this isn't even how I feel about makeup, really (I mostly feel like 'I am much too lazy for this shit') but it's absolutely something that NOBODY says, ever, and I'm like 'YESSSSSSS, women don't have to wear makeup, whose idea was that and LOOK at this character who thinks differently and YESSSSSSSS!' some more. And THEN Park figures out that he likes wearing eyeliner, and I'm like 'LET'S SUBVERT TRADITIONAL GENDER ROLES, YESSSSSSSS RAINBOW!!'

So there's that. And it's fab. And then there are all the other things that are awesome about it that I DON'T want to tell you about because discovering things for yourself! It's fun! But if you want to read about characters who don't quite fit in and who like things that are awesome-but-not-necessarily-mainstream, and who aren't grossly teenagery, then you should definitely read this. And if you don't like any of these things then you should still read it, because there's something for everyone to love. If they're awesome.
Posted by Laura at 20:21