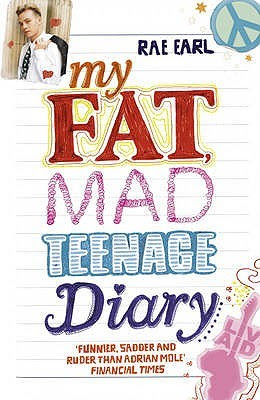 "In other words, he is a bastard shag-about who wants to sleep around. I told her this, but she doesn't want to hear it. He, according to her, is a bad boy- which, according to me, means he is a twat."

I wouldn't have heard of My Fat, Mad Teenage Diary if it hadn't been for the Channel 4 series of nearly the same name (My Mad Fat Diary) which was really and truly excellent. Honestly- the cast, the situations, the way it could take me from tears to laughter and back again in about 5 minutes... I just loved it so much. Before I read the book, though, I knew it was going to be quite different- it's set in the late eighties rather than the mid-nineties (so, you know, the music is different), and, you know, real life just isn't ever going to be as neat, or crossing storylines-y, or just as good as the TV show was.

Because I just want to get that out of the way really quickly- the book isn't as good as the TV show. I know, I know, SACRILEGE, but the thing is, it is literally a teenage girl's diary, which I say not as an insult, but more as a compliment to the programme, which was able to go to much greater depths than this book because it's outside looking into a character rather than being someone looking out on, and reporting on what she sees in the world. Then again, maybe I'm just not so much a fan of reading diaries, because they have a fairly limited scope and stuff. Who knows.

Now. I really did want to get that comparison out of the way (for the maybe 3 people who have seen My Mad Fat Diary!) because I genuinely really did like this book. There were times when I could have seriously been reading my own diary, because SO many of the feelings and thoughts are ones that I've had myself because I have been a teenager too! It's terrible! The hormones and the self-hatred and the feeling totally alone and me-against-the-world-ish- I've been there, and with bells on! As, you know, have we all. But this book wouldn't be at all fun if it was just doom and gloom and depression, and it really isn't- you can tell when Rae's had a bad day because she starts reflecting on all the things that are wrong with her life, but mostly (and I think this is something we all try to do) she looks on the bright side of things and ends up being hilarious.

Sample bit about her mum:


"SHE still comes in when I'm in the bath and asks me if I have washed properly. Especially (and she always whispers this) 'my credentials'. She means my bits. JUST SAY IT WOMAN!! She can't even call sanitary towels sanitary towels. She calls them BUNNIES!! It's like the 1950s in this house."

I found this especially hilarious for some reason, and a lot of the book is like this- it's just that I'm pretty sure that Rae doesn't know how funny she is, and so it makes it heartbreaking when she focuses on her 'faults' (too fat, a bit mad etc etc) kind of all the time, and doesn't realise that she has all these excellent qualities that make the other things not really matter at all. Fortunately, there is a foreword to the book that kind of makes everything better- Rae is all grown up, and has perspective, and she's ok. Which is really really pleasing, and kind of makes you feel ok for sharing in some of her worst moments- because she's over them, so you don't need to worry about them either.


"I'm sharing it because these days it makes me laugh- and because I still see fat girls everywhere labelled as 'bubbly with a nice personality'. And I suppose I want to tell them (and everyone else) that in the end it's all OK. You can be fat and nuts and a virgin when you are 17- and things can still turn out OK."

So yeah, this book has all the things- it's funny, it's sad, it's real AND true, and most of all, Rae just seems like the best kind of person, with the added benefit of being someone real. I feel like it's absolutely perfect for teenage girls to read, but maybe it's just funnier when you're past that stage of life and you can look back on it and go 'yeah, that really was shit.' Solidarity, guys. That's what it's all about.
Posted by Laura at 11:57