So, I think we can all agree that last year got away from me horribly. My bad, I fucked up and went to the dark side and then had to wear a silly hat: 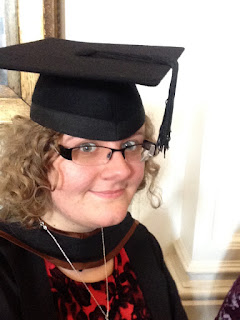 And it was awesome and difficult and tiring, and didn't leave much time for reading. You probably think I've said this all before, and I'm pretty sure I have, over and over again, not least in the last post I did containing mini-reviews for the few books I actually did manage to read during the Shakespeare time. So then what is this post? I hear you cry.

This, my friends, is for the very few books I read after the end of Shakespeare times, times when I thought I would just read all day and night and then have many thoughts about what I had read that I simply had to tell you all. That's not entirely what happened, something which I attribute not only to my tired tired brain, but the fact that I was out living life and meeting people and doing all the social things that Shakespeare left me no time for, as well as my strange and disturbing desire to make Christmas presents for basically everyone I knew, a noble endeavour that left neither my eyes nor hands available for reading (but my rewatch of Mad Men is going extremely well, thank you for asking).

What all of this means is that I haven't written full reviews for anything, but on the plus side there aren't very many things to write reviews for. I believe this means I'm winning or something? Definitely or something. Regardless, and without any further ado or anything, here are some teeny tiny reviews:

I was expecting great things from Heart Shaped Box considering how much I loved NOS4R2, and Joe Hill truly delivered, as I suspect he may always do. This is a kind of traditional ghost story in many ways, only where normal ghosts just scare you, this one seems like it could easily kill you. Whilst the ghost takes centre stage, there's also a lot to be said here about leading a life of quiet desperation, about mental illness, and about the effect you sometimes have on people's lives when you don't really mean to. It's not the absolute best book ever, and there are a couple of aspects of it I could have done without, but, and I think really pressingly when it comes to horror books, it gave me chills and actively scared me, even when I was reading it in a London park in bright daylight with many many people around. Full marks, then, for the immersively terrifying experience.

The Lottery and Other Stories by Shirley Jackson

I'd previously had a mixed experience with Shirley Jackson (The Haunting of Hill House is excellent, We Have Always Lived In The Castle less so in my opinion) but I can't get over how excellent The Lottery is as a short story and bought this collection mainly because I wanted a paper copy of The Lottery to keep (having previously only read it here, and please read it read it read ittttttt) and I figured why not?

So obviously The Lottery was still amazing. But this whole collection was really pretty great and made me wonder if the short story isn't basically the form Jackson should always have been writing in. Not only does the collection do that thing where they're connected in that, in almost every story there is a character with this one same name, (which is one of my favourite things for story collections to do) they're also connected in that, even if they're just talking about the most mundane things, there is always the sense that, if you changed perspective even a tiny bit, you'd see the seedy underbelly underneath, well, the world. I don't know how Jackson manages to tinge the normality of life with something that's just a little bit nasty so effectively, and frankly I don't even want to know, I just want to sit back and enjoy the craftsmanship. Which is exactly what I did with this collection.

Look At Me by Jennifer Egan

I can't write anything more about how disappointing I find all of Egan's books because they're not A Visit From The Goon Squad. Look At Me is definitely not A Visit From The Goon Squad, but it's probably my favourite of her three other novels. Following two characters named Charlotte, Egan looks at emptiness and performance, faces and what lies beneath them, and if it felt flat at times then I can only really relate that to the fact that it isn't Goon Squad. It's like with her books, I intellectually know that I'm reading a book by someone who knows what they're doing and is so excellent at writing, but I just... don't necessarily... like them? Which gets to be a problem when I'm reading for pleasure, really.

There was one part though that I had to read about three times because it set me alight with joy at how forward seeing Egan always always is. So, in the novel there's a website being set up for people with extraordinary stories to broadcast details of their lives and pasts to any interested readers- think a prototype Facebook but only for a select few and that you actually get paid for. So, in response to the whole concept, one character says, "'You're turning people into shopping malls'" and BOOM CLICK isn't that kind of what we're doing to ourselves whenever we post on social media? Like 'hey, here is a piece of information about me that I will give to you and now you may possess it' when we should perhaps think about what it means to be sharing parts of ourselves like that? Only, of course, we do it for free and what does that say about us too? And by us, I include myself OF COURSE because seriously, I'm a big facebooky facebooker at the moment. The main point, anyway, is that this novel was published in 2001, and so written before then, but how prescient does a person want to be?! I may not always actively like her work, but I will never not be impressed at her ability to forecast and predict the future.

Everyone is about to want to punch me. But. I read Alice in Wonderland and I kind of didn't really like it.

Ok, not liking it is harsh. I liked it plenty, but it's now one of those things that I believe gets a lot of praise and credit all the time without having done much to deserve it. I like to call this the 'Emperor's New Clothes' syndrome- Everyone has praised it and applauded it so much that everyone just accepts it as the truth without necessarily being honest with themselves about whether they really and truly like it or believe that to be the case.

For me- I felt like it was a predecessor of Modernism in that it didn't make much sense, I can't quite cope with stories that end with 'and it was all a dream' because WE WEREN'T ALLOWED TO DO THAT AT SCHOOL, so why is this book allowed?, and oh my god there were so many songs. Nobody wants songs in books. Seriously. I barely even want the sorting hat's song in Harry Potter, and that's basically just really fun. Nonetheless, I liked Alice as a fun and slightly weird children's book, but remain ultimately annoyed at how overhyped it seems to be. *scurries away quickly*

Career of Evil by Robert Galbraith

I could tell you how I'm kind of annoyed that JK already seems to be pushing together her brilliantly named detective Cormoran Strike and his awesome assistant/partner (we're not wholly sure which) Robin. I could tell you that this is the darkest of JK's detective novels so far and the descriptions of, well, really you don't want to know, went too far at times even for me. But mostly I want to tell you that, as with the previous two Cormoran Strike books, I had a really difficult time putting this down once I started reading it, and I had a couple of sleepy sleepy days at work because of it. This kind of book devotion makes me think I should probably read more detective stories, and yet I pretty much just read JK's because it's her and how can I not? And how can you not? Seriously, I promise that you want to read this series because oh man. JK knows how to write a twist, just as well as she can write about, well, dismemberment and the like. So, to conclude, ew.