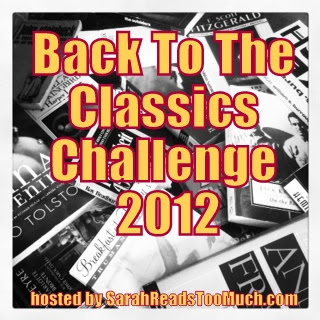 Since everyone's signing up for challenges and stuff and I don't like to be left behind with things, I'll tell you all about the challenge I'm going to be doing next year, which is the Back to the Classics 2012 Challenge. I'm taking part in it essentially because everyone I love and respect in a blogging way is doing it, and I thought I'd try being a sheep for once in my life (also because I want to read more classics, and I can obviously only do that if being forced to, but it's mainly the sheep thing). Soooo, the Challenge has nine categories, and they are (with the tentative books I'm going to read for each of them):

Classic romance- The Age of Innocence by Edith Wharton

Classic Award Winner- The Grapes of Wrath by John Steinbeck (I might have to change this because I'm not sure The Grapes of Wrath did win any awards, and I might be thinking of Steinbeck's Nobel Prize... But I would like to read a Steinbeck, so if anyone knows of any that did win awards, let me know, yeah?)

Classic set in a country you realistically won't visit in your lifetime- Things Fall Apart by Chinua Achebe (Nigeria- although it's fictional Nigeria, so if I find myself in Nigeria at some point in my life, I won't be a liar!)

I am excited, because these are all books that I've had for far too long, and which inevitably get pushed aside for books that are easier because, you know, they're not classics! So yay for self improvement in 2012! Plus, if the world ends, I'll at least be able to say I've read Othello...

I'm sure I'll sign up for more challenges when I see some I like (if you're hosting something awesome, tell me about it in the comments and I'll check it out and have a think about it) but to end out this year, I'm taking part in the Advent with Austen event (not so much a challenge as an opportunity to read me some Austen) which I highly recommend signing up for because, who doesn't love Jane?! At the moment, I'm thinking I'm going to join in the readalong of Sense and Sensibility (because I always forget the plot of it which disturbs me), read Lady Susan/The Watsons/Sandition, because I have it and I haven't read it, blog about my visit to Jane Austen's house/Chawton (where I got to touch rare books, and enjoy one of those rare perks about living in England) AND I might watch Clueless as well because it clearly counts as being related to Austen, and, you know, I wanna. By my calculations, this will give me a score that makes me Mr Bingley, about which I am extremely meh. Although- if I count the three short books separately, that will make me Captain Wentworth, which is a much more pleasing result if you ask me! So, we'll see. But go sign up and we can be Austen buddies! Go on!
Posted by Laura at 09:29