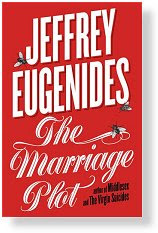 In a way, this year has been all about a developing relationship between me and Eugenides. All the way back in January, I read The Virgin Suicides and was exceedingly underwhelmed by it (that's a nice way of saying I hated it) and I kind of thought that was it for Eugenides and me. Over before we'd even begun. But then, something strange happened. In April, I read Middlesex, and oh how I loved it! I loved it so much that I didn't know what to do with myself after I'd read it, and everything I'd felt about The Virgin Suicides became completely irrelevant. I hardly even thought they were written by the same person, to be perfectly honest, and so I fell in love with Eugenides. Fortunately for me, I fell in love with him in a year when only his third novel ever was being released, and hence I can say, with great pleasure, that I read all his works in one year!

I was hoping (in the few minutes I remembered The Virgin Suicides was by Eugenides) for a book that was a lot more like Middlesex than The Virgin Suicides from The Marriage Plot, and what I got, refreshingly, was something entirely different again. I sense that Eugenides likes to change things up a lot, and I love that about him. In The Marriage Plot, I got something which I actually wasn't expecting- a book I liked even better than Middlesex. This was probably just down to the fact that The Marriage Plot most fits with my own experiences (I actually felt like I could relate to Madeline, Mitchell and Leonard at different times, which connected me to all three of the primary characters) and I just love love loved it. I almost loved it so much that I can't think of anything at all intelligent to say about it- I just want all to read it and love it and cherish it above all else.

But let's try to say some intelligent things, shall we? Well, I'd read part of this book without realising it, because in, I think, the summer fiction edition of The New Yorker, there was a 'short story' by Eugenides (which was totally exciting because I was all Middlesex-loving and excited for The Marriage Plot) that was actually a section from this book (if anyone's interested, it's the section where Mitchell's working at the hospital in India). So I was reading it and I thought I was going mental, because it seemed so familiar to me, and yet I couldn't have read it because this book is brand new! It was all very odd, but then I thought about where I could possibly have read it before, remembered my whole New Yorker subscription and then found the 'short story' in said issue. All I have to say about this is that 1) I'm kind of irritated at The New Yorker for not, you know, making Eugenides write a short story OR for not sort of at least saying it was adapted from his new novel; but also 2) it is a section extremely well suited to turning into a short story, with just a few mentions of Madeleine omitted. It also made me think that, actually, all the sections could definitely be read independently as well as a whole book, because there are only a few threads that run through them which relate to the stories of others, which is kind of how life is too, you know? (Watch me get all deep!)

You might have noticed that I've written like three paragraphs without telling you anything about the plot or anything much at all really, and that's mainly because, if you just hear about the plot in a simplistic way, it sounds kind of lame. Because, essentially, The Marriage Plot is about a love triangle, and oh my GOD, haven't we had enough of those? But then really, it's not about that at all- it's about three people, and two men who happen to love the same girl, and this girl only loves one of them, but actually she doesn't really know who she is or what she wants yet because she's only 22, for goodness sake! I can wholly relate, apart from the bit where two men are in love with me. I think, far more interesting than the 'love triangle' are the parts where these really young people are figuring out who they are, and learning a lot more than they expected.

I've read some criticism that Eugenides doesn't know how to write women and I don't think that's true at all (I think it was true in The Virgin Suicides, but not anymore), and, in fact, I think he writes people about as well as any author I've read. His characters don't just sit there dully on the page, they live and breathe and kind of exist as much as any characters have. Everything about them seems genuine and honest and just a realistic depiction of how people actually are. I mean, I could be wrong and I might just have found a writer who somehow seems to have gotten specifically inside my head, but I think his appeal is more universal than that, and, you know, everyone should read his books, basically!

So yeah, The Marriage Plot. I've spent my time rambling about it, now I recommend that you spend some time actually reading it because it's so wonderful and complex and the characters so alive that you'd be a fool not to.
Posted by Laura at 12:45