Devouring Films: Stand By Me 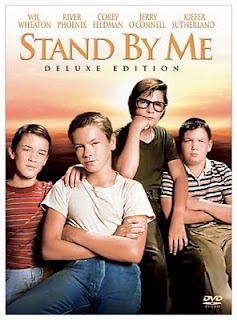 Stand by Me is that rarest of all things, a good Stephen King adaptation (the only others I can think of right now are The Green Mile and The Shawshank Redemption) and I think that the greatness of all three can only mean that it's really difficult to translate some of King's books to the screen because some of the things that are so scary on paper just don't translate into anything good onscreen (i.e. the directors' imaginations suck, or at least their ability to translate those imaginations into moving pictures does anyway). Basically, it's best just to stick with the stuff that's deeper and more meaningful then some creepy clown terrorising children and their adult counterparts (not that I've seen It, but I hear it's bad), and The Body, on which Stand by Me is based, is definitely one of those stories.

Now, I could definitely make this post purely about why I now mourn River Phoenix exponentially more, and, it's true, that will come. But first, let's do a little comparison activity, shall we? Stand by Me remains extremely faithful to the story of The Body, down to the leech on poor Gordy's balls, but there were some slight differences that I noticed, but which didn't jar at all with me. One of these is that Gordy and his recently dead brother's relationship is a lot closer than the one depicted in the book- whilst in The Body, Dennis was kind of a distant stranger to Gordy, though he loved him and all; in the film, Dennis is Gordy's protector and cheerleader, which means we have to assume that his death has had more of an impact on Gordy than in the book (where the main impact is- wow, my parents don't care about me anymore, I can do what I want!) I also felt that Teddy wasn't as much of a no hoper as in the book, and he seemed to be in on a lot more of Gordy and Chris's jokes than the Teddy in the novella. And... that's kind of it! I mean, I'm sure there are other things that changed from book to movie (and I last read The Body, ooh, 2 months ago, so I'm not the best judge of the similarities and differences) but really and truly, the feel of the movie is exactly the same as the feel of the book, which I think is an extremely difficult thing to pull off, and all credit to Rob Reiner for doing it so very well.

Now I can talk about River Phoenix, yes? Because oh MY, can that boy act. That's not even a question because the answer is self evident, especially if you watch, like, 5 minutes of this film. His character, Chris, is definitely the most complex of the four, even more so than Gordy, because he's continually caught between what he wants and what is expected of him (a lot, and nothing much at all, respectively).  Phoenix's performance stands out way above the other young actors' (although, granted, they're all pretty good, especially for their ages) because he's just so intense, so focused, so much... more than the others. I watched Johnny Depp do an interview along with Ricky Gervais, Carey Mulligan and Ed Byrne, and Frances texted me saying 'he looks like a different species to the others' which, 1) So. True., and 2) is kind of the way I feel about River Phoenix and his acting- it's like he's barely acting at all, which at the same time is the best kind of acting there is, which also reminds me of Johnny Depp. So, when he died in 1993, (he was 23, for gods sake. The world is lame) I think we all lost an actor of incredible depths, most of which will forever remain undiscovered.

(Aren't we all glad I linked River Phoenix to Johnny Depp without mentioning the whole 'Phoenix died outside Depp's club The Viper Rooms with Flea from Red Hot Chili Peppers, and Joaquin Phoenix by his side. Because really, do we need to hear that again? That used to be all I knew about River Phoenix, but now I know things that are a lot more important, like, oh my, what an amazing actor, and, also, I think I might love him. Sigh.)

Anyway, anyway, anyway. Back to the film, and I think there are two points where Phoenix is at his best. Firstly, the bit where he tells Gordy that he needs to think about himself, and, if necessary, ditch his friends, because, even though he's so angry and shouty about it, he's also sincere, and so so sweet. I was going to post a youtube video of this bit, but I can't find it- wah! So instead here's the dialogue, which really, I think, shows how much older than Chris is than his years:

Chris: I know how your dad feels about you. He doesn't give a shit about you. Denny was the one he cared about and don't try to tell me different. You're just a kid, Gordy.
Gordy: Oh, gee! Thanks, Dad.
Chris: I wish to hell I was your dad. You wouldn't be goin' around talkin' about takin' these stupid shop courses if I was. It's like God gave you something man, all these stories you can make up, and he said 'this is what I've got for ya kid, try not to lose it.' Kids lose everything unless there's someone there to look out for them. And if your parents are too fucked up to do it, maybe I should.

I mean, that's an impressive speech even in writing, but it's delivered with passion, and at no point do you think 'Hey! Chris is just a kid too', because, in the way he speaks, and the way he carries himself, and everything about his performance, he really isn't.

And then, the other totally impressive acting comes here:

I mean, don't you just want to curl up in a little ball and cry, not only because of how horrible the world is, but also because we're without River Phoenix and oh man, what he could have given the world.

Anyway. In short: I love River Phoenix, and Stand by Me is very very good. Not my favourite King adaptation (that would be The Shawshank Redemption) but not far behind. Go. Watch. Be happy.
Posted by Laura at 10:12