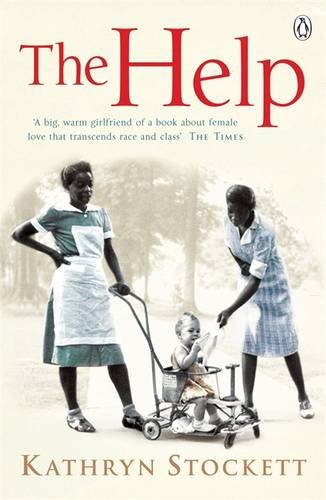 I have finally finished The Help, and thank gawd for that! I mean, I think it's really easy to mock something when you spend a whole month on it and have a lot of time to think about it, but it's also easy to mock The Help because, you know, not. Good. Writing. So I'm glad it's over, but I'm also sad that the group read is over because what will I do with my Tuesdays? What will I MOCK?! What character can I hate now?!?!?! (Oh right, that's still you Skeeter.)

Sadly though, this last section of the book was kind of an anti-climax in the mockery stakes, because I can barely think of anything to say about it at all, good or bad. Skeeter's mother didn't die, which was sort of odd because normally doctors know things and when they say someone's going to die, they die. Although seeing Skeeter's ailing mother did make Hilly act like a human being for all of about 5 seconds, so that's something I suppose (Hilly's compassion, of course, only being extended to white people). But the whole section, I could really just feel the book wrapping itself up, dutifully setting into place the mechanisms to finish everything off with a nice neat bow, or what Stockett considers to be a nice neat ending.

Because, I have issues. Of course. I mean, it's obvious that Skeeter was going to move to New York and be a writer, because Stockett had her driving around all miserable and wanting to leave, and when people want to do stuff, they automatically get to do it, no questions asked. If they're white, of course. And then she has Minny leave Leroy, to which we're all meant to go, 'Yay! She is woman, hear her roar!' which I did, a little bit, but I also felt like, well, how great is her life going to be now? She's pregnant (maybe with twins), living with her sister, and yeah she's got a job for life (And HOW GREAT was that whole thing with Celia and Johnny, and MINNY CRYING! Just so good. There was a severe lack of Celia in this section) but what the hell is she going to do? I didn't want her to stay with Leroy, of course, but I would just have liked her story to be wrapped up a little more, since now, I feel like she's still got a long hard road ahead of her, and that's just not fair.

And Aibileen. I mean, how can I be happy that she has to leave Mae Mobley because Hilly's a ginormous bitch, and Elizabeth can't stand up for herself (well, she doesn't even know what 'herself' wants)? I like the whole optimistic like 'well, Hilly has to live with being a bitch, and Elizabeth has to live with not even seeing her own actions clearly, and wow, I can change my life!' thing, but I think that expecting a 4 year old to remember the lessons that she's taught her is expecting far too much. I mean, I can barely remember being 14, let alone 4, and if someone had taught me about civil rights then, I don't think it would have filtered into my subconscious. But maybe I'm just being harsh.

So, Skeeter remembered that she was a rich white woman in the South and could basically do anything she wanted, just like I told her. And Stockett showed extreme originality in sending a 24 year old white Mississippi native off to New York when she, a Mississippi native, moved to New York at 24. Amazing. Because, if she is basically Skeeter, then why isn't Skeeter better? You probably shouldn't answer that.

Oh yeah, and didn't we all love the 'well I'm clearly not like this, am I? Should we CHANGE OUR WAYS?!' nature of Skeeter's book? I mean obviously something Skeeter wrote would be as absolutely earth shattering, because she's all kinds of wonderful and has never annoyed anyone in her life. I mean, Help (where on earth did Stockett get a title like that from?!) is clearly the answer to everyone's problems, and from it everyone's lives will improve, apart from the fired maids (whose dilemmas are sort of ignored once the book makes some kind of progress, and some maids don't get fired) and, of course Minny's (although I guess it will, you know, eventually. But definitely not right away!). Oh yeah, and, it really pissed me off how Skeeter was all 'I can't go to New York, I have to stay and help everyone deal with the consequences of the book!' and I was like, you have literally been NO HELP at all on that regard ever, so just shut up and go away. And don't you dare show up in any sequels!

I would happily read a sequel where Minny and Celia team up together to fight crime. That shit would be awesome.

Note: I've only just noticed this, but does the recommendation on the front of the book make it sound like it's about a lesbian affair between a maid and her boss? Because that would have been a MUCH better book...
Posted by Laura at 16:53