Revisiting Films: Big; Or, Isn't There A Law Against This Kind of Thing? 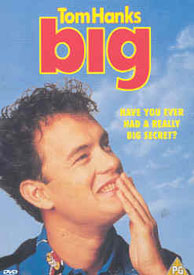 I watched Big the other night, and of course everyone's seen it and thinks it's great, and the piano scene in FAO Schwarz is so classic that it's even referenced in The Simpsons, and basically it's just awesome right? And, of course, it is set in the eighties so basically every scene contains some kind of crime against clothes, but it's a lot better than most things from the eighties, and it's just a load of good clean fun, right?

No! Not right! At all! And I don't want to be all alarmist here, but I'm pretty sure that Susan (Elizabeth Perkins) should probably have been arrested for statutory rape. I know what you're going to say. Tom Hanks is a grown man, and even though he has the brain of a boy, he has the body of a man, so even if he and Susan did have sex (which they definitely did- that scene where he has that massive grin on his face and high fives people, and is generally pretty jolly? Total post-sex scene.) how could she have possibly known that he was actually thirteen years old.

I hear ya, but is that really good enough? He's clearly clearly clearly a child in a man suit- he plays with toys all the time, and his apartment is a creepy (for a grown man) childhood shrine, and he just generally ACTS LIKE A FUCKING CHILD the whole time! Even if Susan didn't know he was a child (and, realistically, how could she?) she must have figured there was something wrong with him, even if, for her, successful men are a total aphrodisiac. I guess my point is more, why involve Josh in a sexual relationship at all? Since it's such a morally grey area, surely they could have just erred on the side of caution and not made Josh and Susan have sex, and basically just had him having a good time and frolicking, and then realising he missed his mum and wanted to go home? I mean, in 13 Going On 30, (which is not exactly the same as Big but a similar enough concept) Jenna shies away from sex entirely because it embarrasses her, but also because it's the shrewd move because, grown men having sex with a mentally 13-year-old? Ew.

And I don't think I'm being a puritan about this at all, it's just that it's all a little icky. Especially when, after Josh has made his wish to be small again, and Susan drops him off and watches him revert back to kid form, she sort of looks at him kind of... lustfully. And that's just not right, am I right? I kind of want Susan to be psychologically scarred by it, to be like 'what the hell is wrong with me?! Did I (statutory) rape him?!' instead of the way she does react, which is basically '*sigh* if only you were older, we could be so happy!' I kind of want to snap her out of it, shake her, and be like 'WHAT IS WRONG WITH YOU?! He's a child, why are you not more freaked out by this rather than making plans for ten years time when your child lover is an actual adult?!' Yeah, it freaks me out, see!

I just had to vent about all that. But really, just put all of that aside as 'Laura's special little issue' and watch Big if you haven't already because it's really fun and silly and also a little bit sad. And then there's some statutory rape, if you like that kind of thing (which I hope you don't). Or if you simply can't watch it now (I understand, I'm not sure I can watch it again myself now!) then just watch this bit, which is simply perfection (albeit inaccurate because when I went to FAO Scwarz, there was a mass of people surrounding the giant piano *humph*- and you don't even want to know how much it costs!)