Devouring Books AND Films: Into the Wild by Jon Krakauer 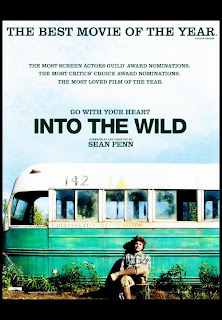 The subtitle for this post should probably be 'Because Laura's too lazy to write separate book and film reviews' but but but I think that a direct comparison of the two is a good thing because they are sort of the same, and yet the story is told from different angles in both, and I feel differently about each of them according to the viewpoints, and how am I meant to show that in two separate posts? Exactly.

Into the Wild, in both cases, is essentially the true story of Christopher McCandless, who, after graduating from college, decided to go off around America, with basically no money, living as much as he could off the land and kind of getting back to nature and away from modern life. It's a kind of Romantic vision, that I wholeheartedly approve of, right up until the moment that he dies from a sort of food poisoning that I can't really be bothered to explain (this really isn't me giving anything away, because it's pretty much stated at the beginning of the book, as well as in the blurb on the back. Plus it's a thing that happened, and it's why this is a story at all).

So that's the story, and what the film and the book do are tell it in wildly different ways, both of which are valid, and both of which I had different reactions to. I watched the film first, as part of my 'On the Road' module at University (which was basically my favourite module in the history of EVER, because, you know, American authors and American landscapes and Americanness!) Anywho, I thought it was a beautiful film, I actually didn't know what was going to happen so I was a little bit bereft at the ending, and above all, I was completely sympathetic to McCandless's ideals and need to break free and just generally be adventuresome.

But then, I read the book, and everything I thought about him kind of changed. Because, the thing is, as much as I admire someone who wants to go off on there own, discover what the world and what life is really all about, McCandless was a pretty selfish dude. Not for the whole wanting to live like a tramp thing because, still, I'm down with that, but for just leaving and not telling his parents or even his sister, who he seems to have loved a lot, not even where he was going, but that he was. I mean, the kid wrote letters to people he met on his travels, so it clearly wasn't an impulse not to keep in touch with anyone, so a few lines to let his parents know he was still alive? Wouldn't have killed him. And this is made so much clearer in the book because Krakauer actually talks to Chris's parents, and gives them a voice, and it's so clear that they're heartbroken, and it makes me really sad that their son would disregard their feelings like that.

This is so much more of a grey area in the film, and you have much less sympathy for the parents, because the way they're shown is as having a really volatile relationship, trying to get the children involved in their arguments, and just generally kind of being monsters. I'm not sure how true this is, because it's not really something Krakauer focuses on- his book is a lot more journalistic in style, and looks more at the facts surrounding Chris's journey, and the reactions of others after his death than what his parents' relationship was like- but with the film, you definitely get more of a sense that Chris couldn't possibly have gone back to live with his parents, even if that meant leaving his sister (who you definitely do feel sorry for in the film because she gets to narrate parts, and her hurt is really palpable). This definitely, however, doesn't really ruin either the book or the film, it just meant that I got a wildly different viewpoint on the same situation by reading the book, which to me is a good thing!

That's not the only way the two are different though. The book, as I've said, is far more journalistic in style, and Krakauer doesn't say anything that he can't back up with evidence from other people. He also, because of the lack of information he has about McCandless and a lot of his time in the wild (especially the last part of his trip into remote[ish] parts of Alaska) includes stories of other men who, like McCandless, have gone into the wild trying to find something more, and wound up getting themselves killed too- Kraukauer even has his own story like this, which goes a long way to explaining why he has such an interest in this story. I didn't hate these additional parts of the book, but at the same time I kind of didn't need them either- there were points where I was thinking 'ok, that's great, but can we get back to what Chris was doing now?' but then again, I do respect the not daring to presume what Chris was thinking or feeling at any point, other than a few, very mild speculations.

The film has no such hesistation in presuming what Chris was feeling at basically every point in his journey. Emile Hirsch, who plays Chris, is such a beautiful actor (also, he's kind of beautiful) and he manages to express every joy, every fear, every trauma, even every moral dilemma, very subtly on his face. I have absolutely no problem with the film assuming it knew what Chris was thinking or feeling, because it's a film, and how else are they going to tell the story? They can't exactly just flash up facts about what happened onscreen and expect people to want to watch that! Also, because it's a film, there's all kinds of scenery that can be included, and oh boy does America have the best natural scenery for filmmaking? I think yes. Or, at least, it has all the different kinds of scenery that one might ever need. In a way, because the film is so beautiful, and a lot more poetic than the book, it's actually a lot more like a novel than the book is (which doesn't actually pretend to be a novel because it's non-fiction... hmm, not sure where I'm going with this...) But anyway, it's still beautiful, even if it downplays the selfishness.

If, say, someone gave you the opportunity to either read the book or watch the film, but if you did both then the world would implode (unlikely, I realise) then I would advise the film, mainly because of that thing where it's more like a novel than the book is, but also because it cuts out all those things that are unnecessary, and leaves you staring right at the heart of the story. It's likely to break your heart more, but at the same time, it's a fair trade for the beautiful film that you get to see. If you insist on doing both, then I'd say still watch the film first, because I feel like, having read the book, all my future viewings are going to be focused on how selfish McCandless was, rather than on the stark and brilliant beauty of the film.
Posted by Laura at 09:58