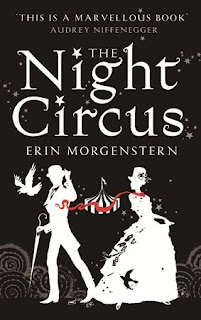 There's been a whole lot of hype surrounding The Night Circus (I'm guessing you probably knew that) but I wasn't really that interested in reading it because, on the whole, I'm 1) not that interested in circuses (I know, I'm a MONSTER), and 2) not that into reading books until they get all old and unloved on my bookshelves and it's at least, like, 10 years since they've been released. BUT then, when I was looking for The Marriage Plot to fondle in a bookstore, I stumbled across The Night Circus and OH, the beauty of this book! It's got a really nice cover for one, but also, the edges of the pages are lined in black and it kind of makes the pages look like they're made of black velvet and who am I to turn down such an opulent book? I, of course didn't buy it because of all the space hardbacks take up, but I did almost immediately reserve it from my library (at the princely sum of 50p) and promptly forgot to read it until I couldn't renew it because someone else (of COURSE) wanted it, so... let's just say it was the priciest library book ever.

But! Of course it was worth it. I mean, aside from the fact that the writing isn't like amazing (it's good, just not the most wonderous way with words I've ever encountered) this book is magic! I mean, it's about magic, and it's magic, which is sort of the best combination of things in a book. I have to say though, I've read more books about circuses this year (two- I read Water for Elephants in August or something) than in my entire life, and I've never really thought about circuses being a genre before- what's that all about? Have I just missed this entire load of circus based books, or is it just a coincidence that I read both these books this year? Both of which, I might add, I only encountered really through blogging, so is there some kind of connection between blogging and circuses? Stop me if I'm going too mental for you...

Anyway, in terms of the circuses themselves, there's no comparison between the circus in Water for Elephants and Le Cirque Des Reves in The Night Circus. I mean, Water for Elephants has a load of animal abuse, whereas Le Cirque Des Reves is literally fuelled by magic, and I can't think of a location I've wanted to be real more than this circus. It's so mysterious and exciting, and so vivid in my head that I can feel what it's like, and the more vivid it is, the more I feel like I can go there, and the more frustrating it is that I can't! If forced to pick a favourite tent, I'd go with the Ice Garden (literally a tent in which everything is made of ice- it sounds stunning and so wonderful) although I did also appreciate The Pool of Tears, because it sounds so releasing- like you can take your grief and put it somewhere else, and just feel better about moving on in the world. I think we all need A Pool of Tears.

I've read a few reviews of The Night Circus that basically go "well, I LOVED the circus, but I didn't really like the whole back story with the magic and the game and the love and stuff", and I get what they're saying because none of the story with the characters really measures up to the descriptions of the amazement that the circus has to hold, BUT at the same time, I think that it's a plausible (well, you know, as plausible as a story about a magic circus can be...) explanation for why the way the circus is the way it is (in short, WONDEROUS) and it's kind of nice to think of the circus, not only as an enchanted circus, but also as a love letter between two people who are apart, but still very close. In a way though, I don't think it's as well played out as it could have been, but at the same time, I wouldn't have wanted Morgenstern to spend more time developing that story and then expend less effort describing the circus, because that would make me sad! But at the same time, I think it does need the back story to make the circus seem even more rare and wonderful, because a whole book that describes a circus? That would get old, fast.

Right near the end of the book, Morgenstern does something that makes me love her a millionfold, and that is describing the magic that exists within a simple story. And I know that in doing so she's massively manipulating me and all other avid readers (and I think this is a book that appeals to avid readers who really feel the magic of books) and through her most mysterious of all characters, she says this:


"'Someone needs to tell those tales. When the battles are fought and won and lost, when the pirates find their treasures and the dragons eat their foes for breakfast with a nice cup of Lapsang souchong; someone needs to tell their bits of overlapping narrative. There's magic in that. It's in the listener, and for each and every ear it will be different, and it will affect them in ways they can never predict. From the mundane to the profound. You may tell a tale that takes up residence in someone's soul, becomes their blood and self and purpose. That tale will move them and drive them and who knows what they might do because of it, because of your words... There are many kinds of magic, after all.'"

I love this so much, because to me, this is what books are all about- these are the stories that we search for, the ones that we carry with us always and that change us, even in the subtlest ways, so that after reading them, we're never quite the same. And it really is a kind of magic, and it's the best kind of magic because we can all share in it, and it's real.

So is The Night Circus a book you'd carry in your soul? Maybe not. But you will probably always carry Le Cirque des Reves in your heart, and always always wish that you could go to it. And every time you see a circus, you might just want to stop at it, just in case...
Posted by Laura at 12:36