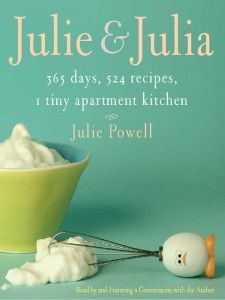 I absolutely adored the movie of Julie and Julia (because, really, you can't go wrong with Meryl Streep) so when I found the book in a charity shop I absolutely had to buy it, and, apparently, to read it within a week! While it's not a perfect book, which I'll get to later, I really enjoyed entering Julie Powell's MENTAL brain, and assuring myself that hey, maybe I'm not that odd myself, really. But I probably am!

So, Julie and Julia, for those of you that don't know, is the story of one woman's attempt to cook through Mastering the Art of French Cooking in one year (that's 524 recipes by the way!) It's also the story of the blog she set up to document this attempt, which made it pretty close to my heart primarily, but more than that, it's the story of finding a direction in life and discovering who you were meant to be all along. At the moment, this is something that I want to find more than anything else, and so this story became even closer to my heart. On top of all this, Powell's writing is honest, self-depricating and often hilarious- you could say that I liked her from the very start.

There are various obstacles and traumas in Julie and Julia that seem to show the universe conspiring against the poor woman, and I felt every trauma with her, wanted to know immediately that she would be ok afterwards, and basically wanted to be one of her dedicated blog followers back in 2002. Which was obviously impossible, although I did feel that I was very much along for the ride with her as I was reading the book. Another thing that I couldn't help wondering, though, was how Julie felt about the film. There is a fair bit from her book that gets distorted, and, by her own admission she is 'not the sort of person you could describe as cute' (I'm definitely paraphrasing here), so I have to question what she felt about the casting of Amy Adams, the definition of cuteness, as herself. I don't know about Julie, but I would be sort of put out by the casting of someone more attractive than me as myself in a film, but it's sort of a difficult thing to complain about, I guess. I would also be irritated by the very clear attempts to 'Hollywood-ise' my life, since the movie makes everything about the project seem so much more glamourous (and if you think her life was unglamourous in the movie, you really have to read this book!) Fortunately, for me and my reading, I loved book Julie far more than movie Julie, if that means anything at all!

Despite my love for Julie, however, Julie and Julia did have a few flaws. One of these, for me, was that there were a few too many food descriptions for me. This sounds like a ridiculous complaint to have, since I pretty much knew what I was getting from a book where a woman is cooking 524 dishes/recipes, and it honestly didn't bother me that much, it's just that I found myself towards the end skipping the description of another recipe made up of foods that I don't like (I'm a notoriously fussy eater though, so my 'too many recipes' is probably your 'mmmmmmm *mouth waters*') Apart from that really finicky complaint, I also didn't like the faux diary entries based on Julia Child's life with Paul, as played out in Julie Powell's brain. I get what she was trying to do entirely (the book is called, after all, Julie and Julia) but for me they didn't really work, and after reading them I was left going 'really?' In contrast to this, what the movie did, taking these little seeds of an idea and expanding Julia's story, I think, worked extremely well, so I guess the interspersing idea was a good one, it just could have definitely been done better. (Side note: Julie mentions both Meryl Streep and Stanley Tucci in her book, which just made me extremely happy! She didn't even realise she was casting a movie!)

But these are just small complaints, and I really did truly enjoy reading about Julie's essential transformation of her life, her bravery in not just sticking with what she was used to, and I honestly find her completely inspirational. Towards the end she talks about how Julia Child essentially rescued her when she was drowning, and it honestly wouldn't surprise me if Julie herself ended up inspiring a fair few people herself, to undertake their own projects, and change their lives too. Can I also just take a minute to talk about the dedication to the book too: "To Julia Child, without whom I could not have done this, and for Eric, without whom I could not do at all." If I was ever to write a book, I'd love to be able to write a dedication as succinct and beautiful and moving as this. Also, how much do I want a husband like Eric?! (Clue: it's a lot!)

So, please. If you loved the movie like I did, read the book and love and adore Julie Powell as much as I do. Just, try not to get offended by how often she says fuck, because come on, that's fucking awesome! And if you have read the book, please tell me how much you loved it in the comments- you know you want to...

p.s. I've just remembered that one of my top reasons for loving Julie is that she mocks the Republicans she works with/for almost constantly. That's my girl...
Posted by Laura at 21:04