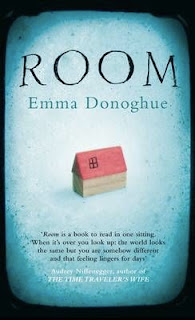 And when I say devouring, I really mean devouring. I read this when I had a stinking migraine, and still I could hardly put it down (except when I really had to, like when I thought my head would explode into a million tiny pieces. But still it crept into my hands again!) Unfortunately, I feel this review is going to be a case of, like so many times before, me liking the book so very much that I can't adequately express it in words, and you'll be left feeling bewildered and possibly a little pissed off at my ineloquence (and already I'm not even using real words! You see!) But I'll try my best to show my love, AND not to give anything away.

I suspect you've probably heard of this book if you read anything at all concerning newly released books- I hardly do at all, and even the briefly noted review in The New Yorker, and I think possibly the New York Times online review (yes, I like to pretend I live in New York, problem?) both piqued my interest in the book and made me want to read it really badly. I think what tipped me over the edge to actually read it was Alley from What Red Read saying it was one of her top recommended novels, but that's just because I'm a tiny bit obsessed with her blog (go and visit it! Now!) But anyway, the reason I really don't want to give anything away about the book is that those reviews were just on the right side of being intriguing enough without acutally giving much of an indication of what happens to Jack and his Ma, which is perfect, because my reaction to what does happen was completely natural and not based on any prior knowledge of them. If that makes any sense at all to you, then you probably deserve a medal! (I'm still trying!)

So, Room basically opens on Jack's fifth birthday, which is, to the reader a pretty sad affair, but to Jack is the best day ever. Jack has lived his entire life in a locked room with only a tiny skylight as a window, and, so that he doesn't know about all the things he's missing out on, his mother pretends that the room is all that exists- the things they see on TV are just pictures, and everything outside the room is just 'outer space'. From Jack's perspective, then, everything is normal and fine, and because he is the narrator, I was lulled into a false sense of security and thought that everything was pretty fine too- Jack and his Ma seem to be enjoying themselves, and Jack's version of normal started to seem pretty normal to me too. And then I had a moment of revelation, when one of their games was 'scream', where the two scream and shout for help as loud as they can up at the skylight every weekday, and all at once I got it. They, or at least Ma, are prisoners, and no amount of innocent narration can make that less true.

That's about all I'm going to tell you about the plot, because from there it gets really really interesting, but I'm not in any way going to tell you how. What I will say, however, is that making Jack the narrator is a stroke of genius, not only because of the way it makes the whole situtation seem normal, but also because, with Ma as the narrator, the whole thing could become so much more depressing and just utterly utterly despairing, which can have its place in literature, but here would just make the description of a bad situation much much worse. More than that though, since I assume that Donoghue was influenced by real life stories of women held as essential sex slaves who also had children, it gives an interesting insight on truly horrific and unthinkable situations from the viewpoint of a child who has never known any different. It's a very brave choice of Donoghue's, and also one I think that really makes the book as good as it is, since you understand the horror of the situation without any kind of self-pity or despair creeping in from any of the characters.

So, why should you read Room? Obviously just because I told you to, but if you need any more of a reason than that then I suppose I'll have to give you one. Room is an utterly inspiring, surprising and completely absorbing book, that honestly, I finished over a week ago and still find myself thinking about all the time. I don't think it's going to be what you're expecting, and it might just make you that little bit more grateful about youir own freedom, and the fact that you're allowed to go outside any time you want to. And, also, read it because I told you to!

Have you read Room? I'd really love to know what you think about it, so tell me your brain thoughts and things in the comments below!
Posted by Laura at 11:27