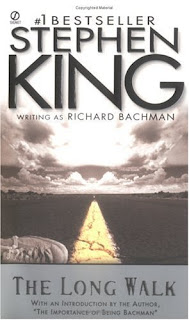 Possibly the best thing I can say about The Long Walk is that it was shorter than The Stand, and that's not something to be taken lightly. Other than that, I'm not sure how many nice things I can actually say about a book that sort of underwhelmed me, after seeming to have so much potential at the beginning.


The story begins awfully intriguingly, with a group of boys embarking on a walk that seems to have something sinister about it, although at first it is not exactly clear what this is. After the absolutely horrifying secret of the walk is revealed (if you drop below 4mph, you die- and I don't consider this a spoiler because it was on the blurb of my copy) things get slightly less interesting, and ever so repetitive. I didn't exactly hate the book, but I did get slightly bored by the constant pattern that the story follows- walking, walking is difficult, someone gets shot, repeat. There is slightly more to it than this (a mapping out of Maine, for example) but this is essentially the formula the story follows, and frankly, there is a lot more he could have done with it.

What could he have done? Well, for a start, there are quite a few hints throughout the book of its setting in a dystopian society, which I think could really have been expanded upon in a broader way, rather than the long walk, which is a form of entertainment for the people in this society, being the only real way that this is shown. There is also some talk of the main character, Garraty's, father, a political dissenter, and I really felt that his story could have been fleshed out too. There are some practical reasons why this was not necessarily the case, one of the main ones being that these are teenage boys, who aren't necessarily the best at elaborating on stories, especially, I suppose, when they are walking for their lives. King chooses instead to focus entirely on the long walk itself, something which, I don't really think is enough to give us a fully rounded story, and this one really leaves us wanting to know more about a society that would consider the ritual murder of teenage boys entertainment.

There are, of course, some redeeming features of the novel, it's length being only one of them (seriously- a novel that has, I think, less than 300 pages after The Stand is such a huge relief!). Garraty is a fully formed, living breathing character, which makes the thought of his death all the more horrifying, and the dehumanising actions of the crowd all the more horrifying. It also makes one think of our own society, and how, taken to the ultimate extreme, our voyeuristic nature (anyone like watching boxing?) could lead to an event as horrible as the long walk. This is perhaps what is most interesting about King writing as Bachman- while he is not actually writing horror stories, he does get to the heart of humanity, and finds only scary things there. But I still want to know more about that dystopian society!

So, The Long Walk. Not a long book, but it's increased length could have been a complete advantage to it. It's worth reading if you want a relatively predictable ending, and a lot of description about walking a really really long way. But, to be completely honest, I could have done without it.
Posted by Laura at 18:53