Devouring Books: I Feel Bad About My Neck by Nora Ephron 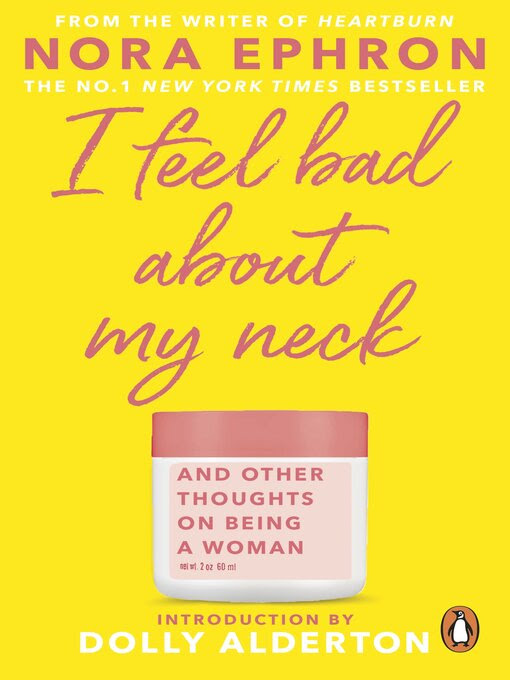 Nora Ephron is probably one of the most hilarious women alive. If you haven't seen When Harry Met Sally, you're missing out on a vital life experience, and this book is almost as good an experience as that film (but not quite). I Feel Bad About My Neck is a collection of essays, some of which have been published in other places, some of which haven't, and pretty much all of which are hilariously entertaining. Nora, I do believe you are fabulous.

I'll let you discover your favourite essays on your own, but my personal love goes especially to Blind as a Bat, in which Ephron laments the deterioration of her eyesight as she has gotten older, and her inability to ever find anything, meaning that she can never find her glasses to read. As someone who has never been able to see, and who never loses her glasses because they are literally necessary for me to get on with my day, I couldn't really sympathise, until she said this, about reading:

Yes. Just yes. I would just like to suggest to Ms Ephron that she keeps her glasses on a chain like a librarian or something, but something tells me that this is something that wouldn't necessarily appeal to her...

My other favourite essay was On Rapture, in which Ephron describes something that I think we all know only to well- the way she remembers reading the books that have made a massive, earth shattering impact on her life. I just loved it so much, especially the way she can remember exactly where she was the first time she read these books, as if they present an epiphany to her that is worthy of a flashbulb memory, and in a way they do. I loved this so much, because I can really do this with books I loved- I can remember reading almost all of Little Women on a car journey once, and reading The Perks of Being a Wallflower on two consecutive train journeys, and reading Angels in America in my second Uni bedroom. I suppose the point is that these books are so special, so earth-shattering, that they deserve your full recall, and the very very clear memory of their first readings. I definitely thought that this was something that only I did, so it makes me very happy to be in such fine company as I am with Nora Ephron.

The rest of the essays, more or less, deal with various aspects of Ephron's life, including her much loved New York apartment that ended up screwing with her, her internship at the Kennedy White House when, she laments, she must have been the only intern that Kennedy didn't make a pass at, and general other bits of hilarity that you really should check out. I must admit, however, that there was a certain point in these essays where I was getting slightly annoyed with Ephron, because she kept talking about her appearance, and trying to avoid ageing, and other things of a purely physical nature. Now, I'm not saying I want everyone to write about deeper political and social and philosophical issues, because, quite frankly, that would piss me off. But there was definitely a point in these essays where I thought 'can you please think about something other than your appearance or your skincare routine of whatever for one minute?'

And then I got to the last essay. And I found out that she could. In Considering the Alternative, Ephron talks candidly, and then heartbreakingly, about getting older and its realities. She talks about death- not in a funny way, but not in a morbid way either- just about facing up to it's existence, and the fact that it's going to happen to all of us one day. Except, as Ephron so brilliantly recognises:


"Death doesn't really feel eventual or inevitable. It still feels...avoidable somehow. But it's not. We know in one part of our brains that we are all going to die, but on some level we don't quite believe it."

I mean, can any of us argue with that. I suppose that when you're younger, you feel even more invincible, because death isn't really something that happens to our peers, and so it isn't something that we have to face up to, like Ephron does at the death of her best friend: "I want to talk to her. I want to have lunch with her. I want her to give me a book she just read and loved. She is my phantom limb, and I can't believe that I'm her without her." At these words, I knew that I could definitely forgive Ephron for her shallower moments, because she is so much more than the way she looks, and she knows that too. And, as she puts it herself, "What is to be done?" Because, when you really think about it, life's too precious not to write about what you want, do what you want, and be who you want. I'd like to thank Nora Ephron for helping me recognise that.

Also, she's really funny. Did I mention that?
Posted by Laura at 11:01