So yesterday I read and I read and I read like never before (or, at least, like I haven't done in a while) and it was awesome, except that I was exhausted by the end of it and couldn't really figure out why until I thought about all the mental effort that I put into it, and then thought, yeah, actually, that was pretty exhausting! So, I know you're all just dying to hear what I got up to, and so, without any ado at all, here's what I got read:
Firestarter by Stephen King
I Feel Bad About My Neck by Nora Ephron
Oranges are not the Only Fruit by Jeanette Winterson
AND about half of Everything is Illuminated by Jonathan Safran Foer
I was pretty pleased with this, especially as I really did just do constant reading, few breaks, and a hellueva lot of gummy bears. What I was quite sad about was not taking part in any of the mini-challenges, so i'm going to try and make amends for it now, slightly.

This is the cover that I have for Everything is Illuminated, (except it's the slightly more updated Penguin version, which I couldn't find a picture of!) and it also happens to be my favourite one, because really, I just love those covers. 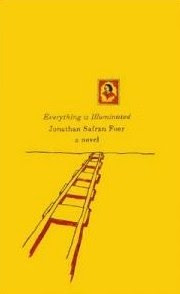 I found this cover for the book online, and, I dunno, it's not exactly the nicest cover ever... In fact, looking at it makes me want to yawn. Quite a lot. It's probably the worst one I found, it's not disgusting or anything but, you know, it does nothing for me really.

I really wanted to take part in the 4th mini-challenge (showing off where I read and stuff) but alas, I can't find my camera! This makes me very sad and stuff, so I'll describe it to you instead (you're gonna love this, trust me!) I did most of my reading on my bed which is only a week and 2 days old (awwww!) and I lay my head at the wrong end because that's nearest the windows so it meant I got the most light. The rest of the time, I read on a beanbag at my nan's house that is about my favourite thing in the world to sit on- it's HUGE, so you can just curl up inside in and lay your head back and basically be a little reading foetus (ok, gross analogy. But you get my point.) So yeah, that's pretty much where I was yesterday!

And now, for the closing ceremony (I definitely just awarded myself the gold for the reading olympics in my brain):

1. How many books and or pages were you able to read?
I read, I guess, basically three books, since I was halfway through Firestarter, and then got halfway through Everything is Illuminated. I would say, without actually checking because I'm lazy, that I must have read about 800 pages? That's just a guesstimate, but I'm gonna say that it's pretty close...

2. How many hours were you able to read for? (Were there many distractions, breaks, etc?)
I pretty much read for the whole 12 hours- I stopped for meals, and also to have a shower, but other than that, it was basically read, read read! I would say that, at the most, I lost 1 and 1/2 hours, and probably actually less than that- go me! Hehe

3. Do you have any likes/dislikes about the 12-hour readathon, compared to the 24-hour readathon?
Having not yet taken part in my first 24 hour readathon, I'm going to say that the 12 hour one was pretty amazing! I do think that 24 hours would probably be too long for me to read, since after 12 I was flagging somewhat... but then I think that the sense of achievement might be slightly more with a 24 hour readathon, because I'm thinking now 'well, 3 books doesn't seem that many' which is a pretty messed up way to look at it!

4. Favourite and Least Favourite books you read?
This is tricky! I really liked all of them! I guess, if forced, I would choose 'I Feel Bad About My Neck' as my favourite, and my least favourite would probably be 'Everything is Illuminated', only because I haven't quite figured it out fully yet. But I am still enjoying it!

5. Suggestions of things to do differently?
I really can't think of anything! I think it was a really well hosted readathon, and I really enjoyed following along on twitter! I know there are some things that I would do differently (eat less sugar, be better prepared, figure out a stack of books beforehand, blog more during etc.) but the hosting was really top notch, I thought!

And so, yes. That was my readathon. If you took part, I hope you had as good a time as me, and if not then stay tuned and maybe we can readathon together some day! You know you want to...
Posted by Laura at 21:31