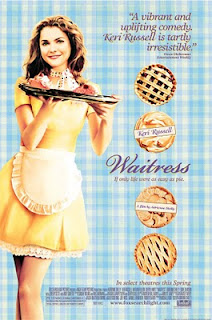 Ah, Waitress. I love this film so much that I actually can't bear to send it back to love film, and for there to be a time when it's not in my possession (yeah, I know I can just buy it on Amazon for like £4. But I like to be dramatic, kay?) I almost don't want to ruin it with some over-the-top, crazy gushing review even though it so deserves one almost more than any review I've written. Probably my favourite new (to me) film I've seen this year, and definitely one that I'm going to watch again and again when I need a little Southern-accent in my life, and can't deal with the four hours of Gone With the Wind. Again.

So, instead of making you sit through a review that uses thoroughly too many positive adjectives, I'm going to give it to you in the form of a pie recipe, the inclusion of which in the the film made it literally delicious and, trust me, I don't even like pie. So, deep breath, here goes!

Take: One unhappily married, unhappily pregnant diner waitress, and her two plucky waitress friends. Add to the mix a series of complex relationships, including one with a dashing new doctor who can be seduced with pie. Allow to settle for a while. When problems with the asshole husband arise, try and smooth them out as much as you can so that the mixture doesn't blow up in your face, and you don't get hurt. Stir in a co-worker's unconventional romance, amazing southern accents, and the adorable/cranky owner of the diner. Add into a piecrust made up of around 8 months in the south, pour in the filling, and cook for around 108 minutes. Enjoy a slice of heartwarming drama comedy with a nice slice of actual pie!

For other, more sane sounding pie recipes, Waitress is excellent source material for them. It's also an amazing example of female written/directed/acted filmmaking, which makes me very happy, and I think is really reflected in the film itself (i.e. there is more than one woman! And she has friends who she talks to about stuff! It's really amazing to see...) Also, pie. Again. If you want anything more from a film then you may be crazy, so go! Seek out Waitress! And I promise to make you a pie if you're disappointed...
Posted by Laura at 15:39