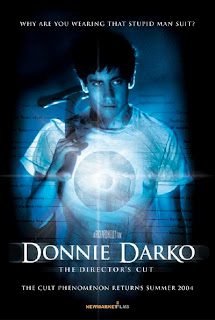 Donnie Darko is one of those films where, the more I think about it, the more confused I get, until I just want to curl up in a ball and whimper until someone explains the damn thing to me! This last time of watching, though, I finally got a lot of things, and then, upon turning to the internet (something which I could and should have done much sooner because has it ever failed me?!) the final pieces of the whole horrible/wonderful puzzle slotted into place for me, and it was like the most giant relief ever. I felt at peace with Donnie and Frank, the giant bunny rabbit, and just about everything felt pretty groovy. I still have my moments, mostly late at night, where I get confused all over again, but then I think about it carefully and come out with the right answer again. Most of the time.

Have you seen Donnie Darko? If not, this review/explainy-thing is probably not going to mean that much to you, and even if you watch the non-director's cut version of the film, it probably still won't make that much sense. What you should probably do now is go away, find a friend with a copy of the Director's Cut (probably some weird friend you don't see that much of because they're always watching weird movies or reading graphic novels or something), and revel in this cinematic excellence for the first time. Then, come back here and I'll explain it to you. Probably. Sort of. If you're already well-versed in the goings on of Darko, sit back, grab a drink, and I'll try and make clearer to you something that may have been pretty obscure. You can thank me at the end.

So, the original Donnie Darko is relatively obscure- boy makes friends with a giant bunny rabbit, who tells him the world is going to end in 28 days (and some hours and stuff), he meets a girl, falls in love, weird, seemingly unconnected things happen, and then he dies but that means everything's ok. I think. I was so confused and shaken up, and just like 'huh?!' at the film when I first watched it, and although I knew I liked it, I wasn't sure exactly what it was I liked. The Director's Cut is a lot more explicit- it provides a lot more information, and clarifies everyone's roles in the context of time travel (I know, it sounds mental still, but at least it makes sense. Sort of.) like Donnie is the living receiver, who has this whole divine job to do, and everyone in the movie is the manipulated living, whose entire subconscious task is to help Donnie do what he needs to do. This explains weird behaviour like his family not being really worried that he might have died when the jet engine falls through the roof, and Drew Barrymore's telling Gretchen to sit next to the boy she finds the cutest (because he needs to love her so that he can be really upset that she's dead and definitely do what he has to do. Also because he's Jake Gyllenhaal, so obviously we'd all sit next to him anyway!)

So, all this stuff about the manipulated living and the living receiver and whatnot I kind of understood after watching the Director's Cut, but then I thought, but if all that needs to happen is for Donnie to die, then why does Frank call him out of his bed before the jet engine comes through his bedroom and make him do all that stuff before him eventually having to die anyway? So, I looked it up. Turns out, more or less the entire film happens in a tangent universe. The engine falls through Donnie's room after the tangent universe is created, so if he dies there and then, he never gets the opportunity to do what he needs to do (send a jet engine back into the primary universe) so that everyone is safe again and the primary universe won't collapse, and everyone, except Donnie, gets to live happily ever after. It pleases me to know this, as it pleases me to know that Frank, because he dies within the 28 days of the tangent universe, gets to travel among those 28 days, helping Donnie out and making sure he does everything he's supposed to so that the universe can be saved. One other interesting thing to know about the film is that, although when they return to the primary universe, everyone forgets about the tangent universe and what happens within it, but they may remember it in their dreams.

This basically explains everything- the weird bit at the end where everyone wakes up and looks freaked out/happy/sleeps soundly, because we're back in the real world, and that feeling that everything was collapsing around them is wonderfully gone. It explains Donnie so much better, and this line "Donnie Darko? What the hell kind of name is that? It's like some sort of superhero or something" "What makes you think I'm not?" because, as we now know, he sort of is a superhero. Also, having just had a quick scan of IMDb quotes from the film, so so much more of the dialogue makes sense, and those seemingly random exchanges are so much less random- in fact, they're not random at all. Don't we all feel more at peace with the world now that we know (the not at all simple) explanations for things? I know that I do.

There are, of course, alternative explanations for what is going on in this simply fascinating film, but they apply more to thinking about the original movie rather than The Director's Cut, which definitely seems to pick just the one narrative to go with. The most popular of these, I think, is that Donnie has paranoid schizophrenia, basically the entire movie is happening in his head, and all the things he sees but no one else does don't really exist. I never really bought this as an explanation for Donnie Darko (although as an explanation for American Psycho I really like it, because it dramatically lowers the death count in that book and leaves you inside the imaginings of this very disturbed man who, nonetheless, doesn't actually kill anyone) because it's a bit of a cop-out in the style of "and then I woke up and it was all a dream", and actually leaves a lot more loose ends than the whole time travel-tangent universe explanation does, so I like it a lot less. Never did I think I'd say that tangent universes and pre-ordained destinies make more sense than mental illness, but there you go, I just said it. Hopefully I've made a little more sense of the wonderful and intricate world of Donnie Darko for you, and if not, then let's just forget this whole thing ever happened, like the manipulated living do in the film. If you'd like to read a probably far more coherent explanation of the happenstances in Donnie Darko, I suggest you go here, but just don't be afraid of the Frank voice that happens without warning like I definitely wasn't...
Posted by Laura at 15:47