Why do I keep talking about Orwell October (Ok, I've mentioned it about twice)? What is it? Why are you so excited by it? These are all valid questions, and don't worry, they're all going to be answered in good time. But let me ask you a question- How many George Orwell books have you read? Probably 1984, maybe Animal Farm, but as for the rest? Not so much.

Well, me too. I've read an extra novel and non-fiction work than those, but pretty much, I'm an uneducated Orwell fan. I also happen to adore his writing style, and I feel like, instead of just reading 1984 for, ooh, the 20th time, I've decided that this October is the time to read the rest (and revisit the ones I've already read). October, obviously because of the wonderful alliteration (you know you love it), although I have had mild moments of regret because, obviously, I could just spend the month reading scary stuff. But show me a book scarier than 1984, and you're a better person than me!

So, the Orwell books that I have (which is basically all of them) that I'll be reading this month are:
Fiction
Burmese Days
A Clergyman's Daughter
Keep the Aspidistra Flying
Coming up for Air
Animal Farm
1984
Non-Fiction
Down and Out in Paris and London
The Road to Wigan Pier
Homage to Catalonia
Essays
A Life in Letters

Of these, I'm saving A Life in Letters until last. This was a bit of a dilemma for me, because I wondered whether it was better to read it first or last, and I thought, well, I kind of hate it when you're reading a book and you're wondering if this or that bit relates to something that happened in the author's life. By leaving the letters until the end, I'll still undoubtedly be doing that, but at least it will be after the fact. And then it's more fun.

Just so we're all aware of the sacrifices I make just to bring you the best reviews of anything you've ever read (ahem), this is the copy that I'll be reading Orwell's novels from: 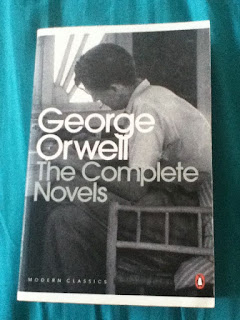 Since it's The Complete novels, and only has 800 and something pages, this is what the said pages actually look like: 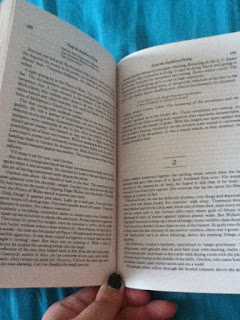 Yikes, that's some tiny writing! The things I do for others- honestly, I think I might need my sainthood soon. Or maybe not...

Anyway, apart from the super-exciting Orwell madness going on this October, I will also be reading Frankenstein for the Classics Circuit, which is the first time I've participated in the blog tour, so I'm predictably excited about it; and I'm group reading Dracula with Allie (and probably some other people too!) over at A Literary Odyssey. AND I'm going to be giving stuff (ie books) I've got lying round my house away and taking part in my first proper readathon which I am the most excited about than possibly anything I've ever been excited about. Maybe. Basically, October's going to rock around these parts, so get excited everyone! And tell me to shut up if I tell you how I love Orwell too much...

P.S... I know I should technically have posted this yesterday, but it's my blog so I can do what I want. And besides, I had to tell everyone how much I disliked The Golden Notebook yesterday, didn't I?!
Posted by Laura at 16:44