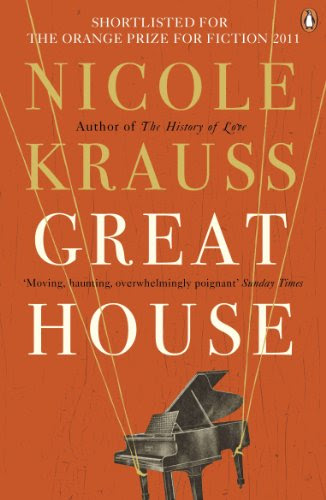 I really loved reading this book, and yet I find it difficult to know where to begin talking about it, at all. It's so strange: it's not that I was all that interested in the story (or I should say stories), and I kind of found the premise holding the various stories together flimsy at best, but the writing was so beautiful that it hooked me in and made me want to savour every word. I really don't want to do this (but I'm going to anyway), but the person whose books Krauss most reminds me of is Jonathan Safran Foer, who just happens to be her husband. I choose not to think that they necessarily influence each others work in a straightforward helperly way, but rather they construct stories in similar ways because they're so perfectly suited that they can't not be together! Call me an old romantic if you must, but that's what I choose to believe.

Anyway, for me the similarities end with their wonderful writing style(s), because I really think Krauss knows how to tell a story, whereas Foer's storytelling prowess always leaves me a little... flat. Krauss in fact manages to tell four different stories in this book, and in each of which inspires a sympathy for the characters, and interest in them that really propels you through the book- after the first half, you're left wondering what on earth is going on, and then in the second half, many things are explained that leave a lot of things clearer to you, even though they're still not entirely transparent, even at the end.

What I'm talking about is this. There's this desk, you see, and although you get to follow its progression from characters who are fucked up to various degrees, it's origins remain a little bit confusing even at the very end of the novel. Or, rather, it's origins are clear, but how it got away from them less so, even if we do know where it's been since then. Rather than being frustrating, or detracting from the story, though, you come to see that, the desk isn't really what's important- it's just a piece of furniture. The lives that it is furniture in, though, are much more interesting to learn about and look into, and the way the desk ties them all together is really masterfully done.

My only slight, not complaint, but query about this book is the one section that has nothing to do with the desk at all. I'm not complaining about this part- in fact, it's quite possibly my favourite of all the stories told in the book, concerning an old man and his wayward son, who you think he loves less than his other, easier to decipher son, but then realise that he actually cares SO much about him that it makes him almost bitter with it. So yeah, I really like this part and all, but I'm also kind of like '...but why is in this book?' It's kind of a random inclusion, and I honestly have no answers to it- I'm willing to accept that I liked it so I don't really mind, but at the same time I'm still like 'huh?' (This is partly why I listed this book as one of my top ten book club picks- I NEED to discuss this with other people because I really don't understand how it relates to the other parts, even though I liked it. HELP ME, people!)

Anyway, since without discussion I don't have many intelligent things to say about it, how about some lovely lovely quotes from it? We all love some nice quoting, right, and I couldn't help myself with this book- I was copying out whole pages, chunks of things that seemed really really important at the time, and now probably just seem stupid. Well, let's see!

"I would not pass on a book that I especially loved to another. I am embarrassed to admit this, knowing that it reveals some essential lack or selfishness in my nature, and aware that it runs contrary to the instincts of most, whose passion for something leads them to want to share it, to ignite a similar passion in others, and that without the benefit of such enthusiasm I would still be ignorant of many of the books and much of the music I love most." - This used to be me, but then I started a book blog, so recommending books is all I do!

"Everything about him began to annoy me. The way he whistled in the bathroom, and moved his lips as he read the paper, the way he had to ruin every nice moment by pointing its niceness out."


"Why was it that there was always a unit on history, math, science, and God knows what other useless , totally forgettable information you taught those seventh graders year after year, but there was never any unit on death? No exercises, no workbooks, no final exams on the only subject that matters."


"From a young age, you tirelessly searched for and collected suffering. Of course it isn't that simple. One doesn't choose between the outer and inner life; they co-exist, however poorly. The question is; Where does one place the emphasis?"


"When at last I came across the right book the feeling was violent: it blew open a hole in me that made life more dangerous because I couldn't control what came through it."


"In the next world, we will dwell together in the memory of our memories... We live, each of us, to preserve our fragment, in a state of perpetual regret and longing for a place we only know existed because we remember a keyhole, a tile, the way the threshold was worn under an open door."


Nice, huh? I often find that, the more quotes I've copied out of a book, the less I actually have to say about it, which seems like a weird paradox to me, but, whatever. This book sort of rocks, maybe a tiny bit less than The History of Love, but I loved and adored that book, so this remains really great. I can't imagine a person who wouldn't  want to read it after this disturbingly vague review, anyway, so that means we'll all be reading it by tomorrow, yes? Jolly good.
Posted by Laura at 09:31