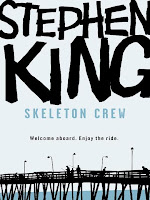 Skeleton Crew is the second selection of Stephen King short stories I've reviewed, and still I don't have a clue how to do it. I'll start here though: I have such a rough time reading books of short stories, or rather getting started on reading them, and who know why? Well, Stephen King does of course:

"PEOPLE ARE LAZY." (Thanks to Kayleigh for alerting me to this video!) He's so right, at least in my case! It's funny though, because even though it probably took me about 3 weeks to read the first, say, 5 mini chapters of The Mist (technically a novella, so I question its presence here!), once I got going, I read the whole thing (606 pages and 22 stories) in like 3 days. Go figure.

I guess it's because really, when you get right down to it, I do kind of love Stephen King's short stories. They allow him to branch out from pure horror, and move into Sci-Fi, Crime, Thriller and even poetry, although the less said about that, the better. All in all, it's a pretty great selection, and the majority of the stories I did find really engaging, AND I would say, some of them were genuinely scary. I don't know whether this was just because I hadn't read them before (as opposed to say, The Shining, which is scary, but was much less so when I read it and reviewed it here) or because there's something special about the short story that means King can go way further into the depths of scarytown, population: me. And also, I don't know if you know this, but most Stephen King novels have a happy ending, and by happy, I mean the threat is eliminated, and at least a couple of the characters you love are still alive. He doesn't do this so much with his short stories, which makes them a lot more bleak, and, by extension, much, much scarier.

Since I really don't know what to do with short story reviewing, allow me to pick out some of my favourites and the few stories that I didn't really like (there are very few, I might add). So, my favourites:

The Mist: I probably haven't been so scared by a story since the first time I read It, and that's saying something. There's so much tension and fear and horror, all extremely finely tuned and brilliantly punctuated with moments of true horror. I'm now a littletinybit afraid of fog, so that's probably something I'm going to have to work on.

The Monkey: I was also genuinely scared by this story, about a toy that comes alive, making people die whenever it crashes its cymbals together. A horrible horrible notion, but I was mostly afraid of the description of the toy itself (SO CREEPY), as well as leftover childhood fears that my toys would come alive at night (did anyone find that an appealing notion?! I mean, I'm not saying that I think Toy Story is a horror movie or anything, but the thought of it actually happening in front of my eyes actually terrified me). So yeah. Scary scary stuff!

The Jaunt: A kind of history of the teleporter, combined with a twist ending that I definitely saw coming but was still somehow really really shocking. More of a sci-fi than horror story, but that ending was definitely horrible!

Word Processor of the Gods: Plays with the emergence of new technology in the early 80s, by imagining a computer that can delete and insert actual things into the real life world. I didn't find this one scary either (I guess it's more of a Bachman short story), but I did think it was really clever, and almost cleverer considering how new computers were at the time.

The Man Who Would Not Shake Hands: Honestly, I just liked this one because it returned to that really creepy club depicted in The Breathing Method, BUT it was also kind of creepy without being to overtly scary. Nona, which I didn't like nearly as much, also gets points for including characters out of The Body. (There are also many references to Cujo in a few of these stories, and I do so love the whole StephenKingosphere!)

Gramma- This is a really, seriously scary story, all windy and witchcrafty and atmospheric, and I'm kind of afraid of being left alone with old ladies now. Really.

Beachworld: Not all that much really happened, and it was way too sci-fi for me- all set in the future and spacemen and androids, and I didn't really need all that stuff when you're not going to craft a story properly. Not his best.

The Wedding Gig: This was fully a mafia-style story, only it wasn't nearly as exciting, and despite the slight twist ending, it didn't really grab my interest. I think I may have missed the point though...

The Reach: I might have just disliked this one because I really really wanted to finish, but it was sort of boring- just a few ghosts and an old lady with unfulfilled ambitions. I didn't really care, to be honest.

So, that's my general verdict! Like I say, the majority of the stories were super-awesome, and I haven't even told you about the typewriter elves in The Ballad of the Flexible Bullet, or this really really really disgusting death in The Raft. It's definitely worth giving this collection a go, even if, like me, you're too lazy to read short stories. Just think, it's less than half the size of The Stand...
Posted by Laura at 13:10