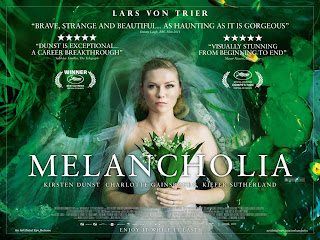 Melancholia would be an accurate description of the state this film left me in. Not because it's all deep and meaningful and life-affirming and whatnot, but because it has such lofty ambitions and glimmers of substance that fall completely flat. Like a really really disappointing cake or something. I was led to believe something different by basically every review of it I read, and I feel really duped by them, or at least that they were duped by this film. Either way, it's all just badness.

Just to take a teeny bit of the sting out of the first paragraph right there, allow me to tell you a few things that were good about this film. Kirsten Dunst's performance as the seemingly bipolar (I mean, she's meant to be depressed, but a lot of her actions, especially early on, seem kind of manic) Justine is really excellent, and deserves all the nice things said about it. That's not to say that I didn't have some problems with the character and her actions, but in pure performance terms, it was really well done. Also... I enjoy Alexander Skarsgard being cast in anything because he's just so... there aren't even words to describe what he is. But as well as being hdjsahfeuafne, he's also a pretty good actor, and I think he does his best with what he's given. Which, unfortunately, isn't a lot.

Problem number one: if this man loved you, you'd be grateful and love your wedding (I realise depression doesn't work like this, but still... SKARSGARD)
Look. I'm not one of those people who needs every single second of a film described to me as it's happening to have any idea about what's going on. I love indie movies, and with most of them, you're pretty much on your own, figuring out relationships and things that might have gone on in the past, and it's all just very enriching so you don't feel so bad about watching a film at like 3pm on a weekday (I rarely do this, I have to add. Really!) But. With Melancholia, it's like the substance was left out entirely. It feels like there are about 10 lines of dialogue in the entire 2 hour and a few minutes running time, and much as I wanted to figure out everyone's thoughts and feelings and past experiences, there just wasn't enough to go on to make any thoughts about it really stick.

Example: Why did Justine agree to marry Michael when she doesn't even seem to like him? (for the record, I like him. I like him a lot.) Because, her saying "But really, what did you expect?" when he just randomly leaves without having an argument with her just isn't enough, and really, who doesn't argue with their new wife when she continually wanders off during her wedding? And whose parents just tear each other apart in their wedding speeches and don't just suck it up and be happy for their daughter? I think there just wasn't enough that was real in this film, emotionally or otherwise- the people in it act in ways that no real people would act, and it's all just ever so wrong. And I'm not just talking about the lack of science behind the planet that's threatening to collide with earth (because that, actually, I don't really care about. I just want my characters to be real.)

I thought, also, that the name of the planet on a potential collision course with Earth being Melancholia would make it some kind of metaphor for Justine's depression, but in fact it wasn't at all, unless it was a shitty metaphor that I missed while I was pissed off with the rich woman for freaking out over something that was beyond her control while she could have just been enjoying the last days. But, in fact, according to Wikipedia, Lars Von Trier said that Melancholia was about how people with depression are able to deal with disasters better because they expect the worst to happen anyway. To which I say, firstly, what the FUCK was the whole first half of the film about then? And also, it fails to even do this! I mean, at no point was I thinking 'oh, look at how well Justine is coping', I just thought 'that chick really doesn't care about what happens...' I mean, granted she does become slightly cool towards the end, but by that point I was just so so over it. Like, massively.

Melancholia is quite clearly split into two parts, so you'd think I wouldn't be able to moan about that, but just watch me go. But really, the thing is, the two parts literally have nothing to do with each other. All that carries over from the first part is that there's this planet thing which is briefly discovered in the first bit, and the fact that Justine is 'scared', which later turns into depression. But apart from that, nothing. Nada. It's basically like two different films, both of which are disappointing and pretentious. And not pretentious in the good way, like how people think American Beauty is pretentious (it ISN'T. Now shut up!) But pretentious in the lack of any real substance, although it does look pretty nice. Here's an example- Justine turns up at her sister's house and can barely walk and cries when Claire tries to bathe her and says her food tastes like ashes (none of which I have any beef with, indeed these were about the only scenes where I felt anything for any character). But the thing is, in about the next scene, without any explanation, or even a hint of time moving, she's up and about, not exactly cured but definitely more functioning than she was like minutes before. It's just all so... unconvincing and hollow, and just bad. Bad film.

So, friends and whatnot. I disliked Melancholia, and then I disliked it some more because I had such expectations for it. This isn't the first time and probably won't be the last time that the promise of Skarsgard has lured me into watching something, and whilst his adorableness isn't really the only thing I want to take away from a movie, on this occasion I'll grudgingly accept it. Unless you have mental health issues like that (and I have them doubly bad- I watched both The Astronaut's Wife and Pirates of the Caribbean 4 for Johnny Depp and OH the badness) I recommend you give this film a wide berth, lest you end up horribly disappointed by something which could have been so much better.
Posted by Laura at 13:13