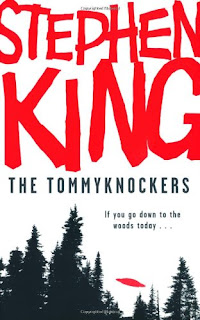 Ugh. This book. I basically don't want to spend any more time thinking about it since I've already wasted precious hours of my life reading it, so this will be brief. Unless I start ranting and then am unable to stop, in which case, well, that'll just be fun to write and I know you'll love reading it. Oh yes.

So. As far as I know, The Tommyknockers was written in a 'difficult' period in King's life, where he was basically doing ALL THE DRUGS and generally being all high all the time. This alone is NOT a good excuse for why this book is so poor, because according to the back of the book, he wrote it over a 5 year period (1982-1987) a lot of which, I have to assume, was him putting it away in a drawer somewhere because it really wasn't working. The point is, anyway, that in a similar time period (I'm pretty sure it's something like 1981-4/5) he wrote It, which, as we're all aware, is the best book in the whole entire world (or, like, my favourite Stephen King so far. Or something.) The Tommyknockers is not It. It's not even The Talisman. It's much much worse than that.

Now. There's bad, and then there's Stephen King being bad, and those two things are very different. Because even when Stephen King's bad, he's still Stephen King, and what that means is that The Tommyknockers is a very well written bad book. And not well written as in 'observe my beautiful language that you just want to quote all the time' but as in 'wow, this is difficult to put down, I like your style Steve!' There were points where I was going 'I don't caaaaare, when is something going to happen?' but I was still like 'one more chapter. Just one more.' because I hadn't read a Stephen King since Misery waaay back in March, and, well, that's clearly too long between books!

But it's still pretty bad. And a lot of it's badness is down to things that I can't quite pin down, even, (I think a bit of it has to do with it being more sci-fi than horror-y, but that's not my main problem) but here are a few things that I can:

1. The characters- I really don't care about the characters. And that's not my fault, it's King's. Because it starts off with this nice lady Bobbi who finds a flying saucer buried in the Earth and decides to dig it out, and for a bit I like her. And then the focus shifts and we're with Bobbi's friend Gard, a suicidal alcoholic, and then I get behind him for a bit. And then it goes into the townsfolk and the 'scary' things that are happening to them, but we never knew them when they were normal, so why should we care about them now? Even in the last part when we go back to Jim and Bobbi, the focus shifts between them and characters we've never met before. Why? And also, what?

2. Nothing happens- I'm not kidding. The entire book is just Bobbi and Gard digging this flying saucer out of the earth, whilst the townspeople experience lots of 'changes' in their bodies and get all telepathic and stuff, and you might think that this is all leading up to something scary and fulfilling and which would make reading nearly 1000 pages worth it, but hey, you'd be wrong about that!

3. Ridiculousness- I mean, really the whole thing was just ridiculous in the end, but I'd like to pinpoint that 1) Around the time Bobbi first discovers the spaceship, ALL the women in Haven (that's where it's set... wow, I couldn't even be bothered to mention that!) get their periods at the same time for like a month. FOR NO REASON! Literally- it's not something that's ever brought up again like 'oh, we have to bleed out so that the alien lifeforms can possess us entirely' or whatever, it just seems to be an excuse for Stephen King to talk about periods. Or something.
And, 2) There's a killer coke machine. I swear, at that point I was nearly DONE with the whole book. I was like 'I'm sorry, this has just become too ridiculous' and I mean, seriously, what the fuck was he doing? I mean, drugs, I know, but doesn't the dude have editors?! Someone to take him to one side and just say 'Stevie, really? A killer coke machine? Come on man, you're better than this.' But apparently no one wanted to take on that task!

And the list goes on. One interesting thing about The Tommyknockers (maybe the only interesting thing) is that King didn't even realise until it was finished that it was basically a giant metaphor for addiction, in that like, the residents of Haven need to stay there (the air of the town is their 'fix') just to survive, and like Bobbi works so hard on digging out the spaceship that she loses all track of everything and forgets to eat and all she can think about is when she can get out there to dig out the spaceship again. And, of course, Gard's an alcoholic so... there's that, even though King seems to have mainly forgotten this by the third part of the book and sort of trails off on that issue. LIKE ALL THE ISSUES. But anyway, it's interesting that he wrote something that contained metaphors for addiction, whilst he was himself addicted, and it's also interesting that he didn't even notice it until later. I mean, how high did the dude get?!

So. The Tommyknockers. It's pretty bad. Like... If you've read all the Stephen King but this and want more, then you can read this and you'll be like 'ahhh... familiar writing, I feel all at home.' My fear, though, is that someone would read this and think 'I am NEVER reading another Stephen King because that was shit' because, well, he's so good! So, basically, read this at your peril. And if you really want to read it then it's here, for some reason (is this legal? I question the legality of this). But actually, read this instead, because... LOL. And also, I kind of believe it...
Posted by Laura at 09:19