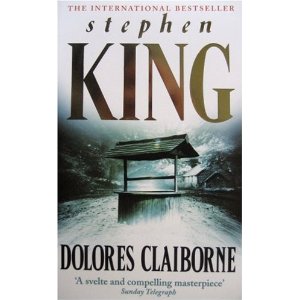 "In the end, the bright colours always go out of life, have you noticed that? In the end things always look grey, like a dress that's been warshed too many times."

I had major reservations about this book, for the one good reason that it's basically one giant monologue, which I'm never NOT going to have problems with- I don't like it when chapters go over about 10 pages, so 300 page book with NO stopping points? What am I supposed to do with that?! It didn't look good from the start.

But. It ended up actually being really awesome! I even figured out where some appropriate stopping places were, but in the end I read almost all of it in one day anyway, which was definitely handy! So. Dolores Claiborne is a pretty straightforward story about one woman's murder of her husband 30 years prior to her confession, which makes up the biggest portion of this book. Oddly, when I read about 2 pages of this whenever I first bought it (AGES ago) I thought that Dolores was going to be the villain in a scary-old-lady way, but nope, she's the good guy (unless you consider murder bad, which it obviously is, except when it isn't... In a book sort of way, that is.)

Ok, so. That's pretty much all there is to it, so it's a pretty simple story and, in respect of its simplicity, King keeps it down to 300 pages, which I have a lot of respect for him doing. Following straight on the heels of Gerald's Game, he has another entirely female narrator which is a VERY GOOD THING (King not always being the most lady-representing author), and that's not the only parallel with Gerald's Game either. My extensive research (Wikipedia) tells me that they were at one time going to be released as a double book thing because the important events in both happen during the same eclipse, and there's this thing in Gerald's Game that was completely unsolved, that Dolores Claiborne solves. And there are lots of other subtle little mentions as well, which I love and which King does a lot. Hence my love for him.

See, I'm struggling to think of things to say about Dolores Claiborne, because whilst I enjoyed it and everything, it feels like knowing too much about it is going to spoil it because only about three things of major consequence happen, and knowing about them (well, I guess you know about her husband's murder, but that's revealed really really early on. Like first 3 pages or something) would totally detract from the reading experience. So let's just say... There's a really interesting and complex example of female friendship in the story, which was a bit of a surprise and a very welcome one, and there's also some mother-daughter bonding which was pretty nice to. To say this book is all about the ladies wouldn't be far from the truth, and it has redeemed King to a certain extent in my mind about the way he presents women in his books. I mean, it's not perfect for that (there's a thing that's a thing that constantly annoys me... You'll have to read it to see!) but it's definitely a good thing, and feels like a step forward, to a certain extent.

So yeah, Dolores Claiborne, I like it! Short and sweet, even though it's a monologue, you can read it basically in an afternoon, and in return for your time you get some really compelling characters and situations and stuff (vague much?!) Well worth the time it takes to read, anyway.

I totally finished this before RIP started, but am I going to count it anyway? You bet I am. So this is Book the First.
Posted by Laura at 10:55