Sunday Sundries: This Will Be Exciting To No One But Me...

...But I got a haircut! I know, (normal) people get them all the time, but I haven't had a proper one for TWO AND A HALF YEARS because I have a hairdresser phobia that's akin to that which most (normal) people have of the dentist. But NO MORE! 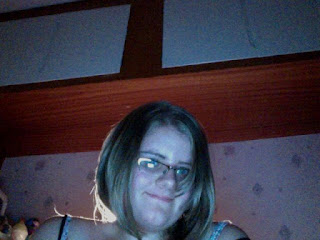 This was the only picture I took that I could allow to be on the internet... Sadly it kind of cuts off the hair... Like the hairdresser did! (Oh, puns...)
I really like it! This is also the first time it's been straight in like... 2 and a half years, and it won't be staying that way, so I'll have to see if I still like it when it's curlified. Although there's not a lot I can do about it if I don't!
Anyway. That was pretty boring news, I'm sorry. What else... Oh yeah, I went shopping with my cousin on Tuesday, which brought to the forefront of my mind how RIDICULOUSLY different we are (she thought I was weird for sending a postcard to my internet penpal [Totally not weird!] and said that Stephen King had a messed up brain despite never reading one of his books [:O] and then I went to wander round Hobbycraft while she had her makeup done by the Boots lady [not that I have anything against makeup, but I don't wear any and it doesn't excite me at all]) but how it doesn't matter! Because we love each other! It's like... Love triumphing over shared interests, guys. It's all good.
Anyway, I guess from my dithering you can kind of tell that I didn't really do anything this week. And I didn't, which was fine except when I try to do a weekly round-up post, it makes for some pretty dull reading, I realise. So let's liven things up and talk about something I really hate: YOLO! We all know that this stands for 'You Only Live Once', right? And to be honest, it's a sentiment that I don't hate- you have to do exciting things, and things you might not get another chance to do, because, indeed, you do only live once. It's just a truism.

But when it's used for something like 'Oh, I've got loads of homework today but there's this major party going on tonight... YOLO!' I'm just like... That's not an awesome once in a lifetime opportunity, that's you being a lazy moron! I mean, the other day I saw a white van where someone had written on it 'Clean me! YOLO'. You only live once, and you're going to spend that time writing shit on people's dirty vans? And you think that's a good use of your time? Basically, everyone needs to get over this before we have an entire generation of moron alcoholics who only drank so much because YOLO! LOL! and civilisation FALLS APART. I don't even think I'm being dramatic.
Young people are so stupid...
Anyway! Bookish update alert: I'm still loving the RIP Challenge. I finished The Little Stranger yesterday and I shall review it tomorrow (here's a shorter version, in case you don't want to read it: meh.) and I'm still trying to decide if Crime and Punishment can count as a RIP book. I think yes, but since I've already read 4 and it's only halfway through September... I don't think it really matters! So I'm going to keep plugging away at it (it's really good, but harrrrrd, for some reason. Russian lit, man) and read some other things cause that's just what I do.
Mum starts her radiotherapy next week, so I don't know how internet present I'll be (probably loads- like I'll come in and be like 'I can't face ANYTHING except the internet!) so DON'T PANIC if I'm not here loads. Cause I know how you worry about me. And have a lovely week!
Posted by Laura at 09:53