Yesterday, I met Caitlin Moran and it was glorious. I could just end the story here and leave you with the tantalising notion of just how awesome it would be to meet Caitlin (it's FAB) but I'm nicer than that so I'll try to recall some things that happened, even though they seem almost dreamlike and surreal now. Because being in the same room with one of your current favourite people doesn't REALLY happen, does it?!

Ok, firstly the event was in this teeny little bookshop in North London, which was at once both excellent because hellooooo intimate venue, but also sort of terrifying in a 'argh! I am going to be super near Caitlin, I hope I don't throw up on her Doc Martens' kind of way. Because about this whole thing I was both SUPER excited and yet SUPER nervous (for no good reason!) all of which combined to make me feel like I was going to throw up a tiny bit.

I did not throw up. That's not how this story goes.

So we got there and it was already sort of full, and the options for seats were either sitting on these weird uncomfortable looking stools near the back, or sitting on a nice looking chair (that unfortunately also turned out to be uncomfortable, but by that point did I care? Not really!) right at the front. I mean, the FRONT. I could have easily reached out and grabbed Caitlin's leg or something (but that would have been weird, and why would I?!) and Frances did, in fact, kick her a teeny bit. Not on purpose, obviously! So there we were at the front, glancing back at Caitlin just standing there in the back of the shop, looking all awesome and sort of other-worldly, in a 'I CAN'T BELIEVE SHE'S IN THE SAME ROOM AS US!' kind of way. And then she came to the front of the room and was inches away from us and it was the BEST THING EVER!

The format of Caitlin saying things was basically a Q&A thing between her and this other lady whose name I can't remember now (which I feel really bad about because she was really good! A good foil for Caitlin), although, if you've seen this piece of wonderfulness then you'll know that a Q&A session with Caitlin kind of turns into 'A question is asked. Many things are said. Half an hour later, the question is answered' which, really, is my kind of interview to watch! And many many many things were said- if it felt really surreal at the beginning, after a while, I was so massively agreeing with basically everything Caitlin said that I kind of forgot who was saying it!

You can guess whether or not my parents are rich...

So all that was awesome, and honestly would have been enough, but then we queued up and waited to speak to Caitlin and get her to sign our books! Cue more nervousness, OR SO I THOUGHT, but I actually felt pretty relaxed because she's just that kind of person, you know? Except, apparently, not for the people just in front of us in the line who she told should be having sex (they were a boy and girl, both single, in their early twenties, friends... I saw her point!) and when she appealed directly to our giggling faces for our agreement, we obviously gave it without hesitation! And they slunk off embarrassedly, and hopefully to, you know, get it ON (but probably not.)

And then we stepped up to her and she was so lovely and friendly and things were said and it's all kind of a blur now, but she definitely misheard my name and wrote Nora in my book and I had to correct her and OH the misunderstanding! And then she told Frances that she had lovely boobs and a lovely dress and there were more things I can't really remember and then said it was really nice to meet us and SHE TOUCHED US and then I died because it was so wonderful! But then I revived, and now I'm probably going to change my name to Nora, because unlike that non-couple, I AM inclined to do anything she says. 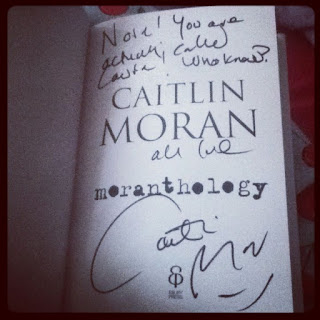 So, that was my very first book signing experience, and I'm pretty sure they don't get much better! I am just this minute slightly regretting that I didn't ask if we could have a picture taken with her, but hey... We all know where we were! And I have this completely surreptitious but actually not that bad photo that I took actually pretty far back in the queue, which should give you some idea of how small the place actually was 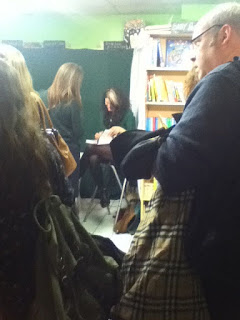 So that's good enough for me! And now, after literally WEEKS (like, 3) of waiting, I can finally read Moranthology! And I shall, of course, report back in due course.
Posted by Laura at 16:48