I realise that no one expects consistency from me (or you shouldn't cause, you know, you're going to be disappointed) but LOOK! Another Top 5 TV post! This is becoming an almost fortnightly thing, kind of! PLUS I have ideas for at least three more, so... Go me with the consistency and all!

This time, I'm thinking about inappropriate crushes, and by inappropriate, I obviously mean 'crushes on cartoon characters'. Look. The majority of TV watching IN MY LIFE has been cartoons, and that goes doubly for when I was younger, so... who else was I supposed to be attracted to? Kids TV presenters or something (ICK)? I'm refusing to defend this (even though I just did) anyway, so here's the list...

I love Daria so very very much, and therefore, anyone she thinks is worth having a crush on, I agree with. It doesn't hurt that Trent is a musician (hot) and has the holy trinity of facial hair, tattoos and piercings (double hot) and just that, for a dude who's 2D and basically just a bunch of lines? He's pretty awesome looking. Whilst Tom was clearly a better match for Daria, I'll always be a tiny bit sad that these two never got it together.

Did I want to be Princess Jasmine and live in a palace and have a pet tiger and a teensy waist? ... Yes. But mainly, I kind of wanted Aladdin to be my boyfriend. He's got a pet monkey, and a buddy who's a GENIE (with the voice of Robin Williams) and mainly? He's really hot.

Ok, so Fry is an idiot. But he's also so so sweet and tries his best, and also you know he'd be a good boyfriend if your standards weren't as ridiculously high as Leela's seem to be. Also, the dude's got the mooooves! (see above)

4. The Beast from Beauty and the Beast

Maybe the least physically (not physically. Erm... least fanciable drawing?) attractive character on my list, but THE BEAST LEARNS HOW TO LOVE AND ALSO DON'T FORGET THE LIBRARY! I don't think I'm the only person who finds it weird when the Beast becomes human again, and definitely not the only person to think that the drawing of that guy? So not cute. The better choice is almost (almost) to stop watching when you think the Beast is dead, because at least he stays attractive. In his own special way, which, I guess, is non-attractiveness.

I like Robin Hood as a folk hero, so most incarnations of him it's just like 'yessssss, you take the money from those rich people!' but the fox from the Disney version? Incredibly hot! Look, it's ok to find animals hot if they wear clothes, guys!

Young Stalin- I feel kind of icky about this crush, but the thing is... Obviously Stalin ended up being kind of bad, and you know, sort of caused the deaths of millions of people, AND in his later years looked distinctly walrus-like, but in his younger days? He was kind of delicious. JUST LOOK AT HIM: 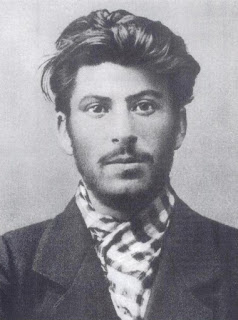 Just imagine him, with his beautiful ideals and lack of having had anyone killed yet, and him whispering sweet nothings about being comrades and stuff. And would you LOOK at those eyes?!

Ahem. So young Stalin. He was hot, guys! Now tell me your inappropriate crushes so I don't have to feel kiiind of ucky anymore...
Posted by Laura at 23:21