Look, I've started a new thing! Kinda. This is just where I'm going to attempt to go places that have a literary background and then talk about them and stuff. Look! Here's one I did already where I went to Jane Austen's House! 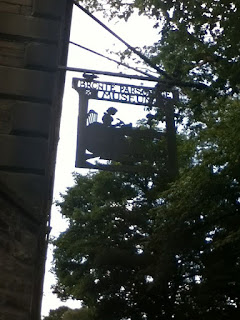 When I went to Haworth, I'd just been on about a 6 hour drive to 'The North' (this is literally what the motorway signs say) with my sister. When I say 'drive', I obviously mean that she did all the work because I cannot, but six hours in a car is still tiring even if you're just the passenger. Trust me. So after those six hours, we had a really brief sojourn at our B&B (Barn to Rest, about 2 minutes drive away from Haworth, highly recommended) we drove what turned out to be the shortest distance ever into Haworth. Considering how incredible GORGEOUS the moors are (at least in August) I do completely regret not walking there, so if ever you're staying not too far away from Haworth, go for the walk.

Haworth is so pretty. I can't overstate that. It's kind of nestled in the moors and has cobbled streets (which always trip me up, by the way) and old-fashioned shops, and is essentially what I guess the popular imagination thinks that all of England is actually like. Trust me- basically nothing in the South of England is as picturesque as Haworth, and that's kind of a good thing because I'm not sure my eyes could cope with this amount of constant beauty, and, alternatively, I'm not sure I could cope with my brain no longer processing the constant beauty. Sample conversation with the B&B owner:

Me: It's so gorgeous here!
Her: (offhand) Oh yeah, I suppose it is. Sometimes, anyway.

IT'S GORGEOUS AND EVEN IN THE WINTER IT WOULD BE ALL MOODY AND GORGEOUS.

Anyway. Before I go into how great the Parsonage was (and I thought it was excellent, both atmospherically and information-giving-ly) a note on the weather. The further north we drove and the further we got into Yorkshire, the gloomier and rainier it seemed to get. This prompted me to make an observation on the differences between the writing of the Brontes and that of Jane Austen, which I now believe can be boiled down to this: Austen lived in the fairly temperate weather of the South of England, so rather than feeling gloomy all the time she could just observe social behaviour and roll her eyes at everything. The Brontes? Totally had to cope with near constant cloud and gloom which, admittedly, tends to put on in kind of a less positive frame of mind. 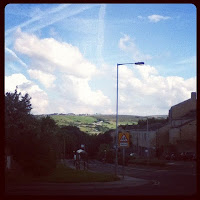 I'm telling you all this because, by the time we got to Haworth? It was gorgeous. Sunny the whole time we were there. The moors were beautiful rather than dark, barren and imposing. It made me happy, sure, but I'm not sure I'll ever forgive the weather for depriving me of some Bronte gloom. 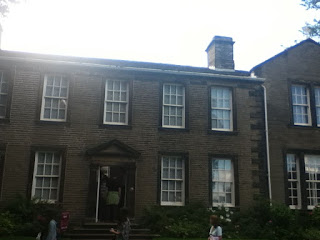 Anyway... moving on from complaining about the nice weather like a crazy person, our first destination in Haworth was, of course, the Parsonage where Charlotte, Emily and Anne Bronte lived for the majority of their lives. It was pretty intense just standing outside it, to be honest- there's a sign on this wall that explains where a gate used to be that the Brontes went through to church, and I had a moment where I could imagine them running through it so they wouldn't be late... like I said, intense! 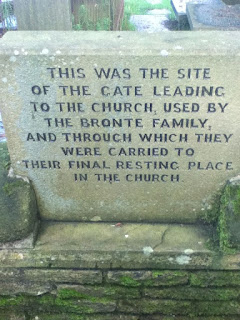 And then, for a nominal fee (I think, £7? I would probably have paid a lot more, anyway) we went inside the Parsonage and got to have a nose around at everything. And by everything, I mean A LOT of things. Like, the table that the sisters used to sit around nightly and write, which was also in the room Emily died in (nice, I know) and almost directly above it, the room Charlotte died in! As in any place like this, that was once a home and is now a museum, there were a few dud areas (I could have done without the whole room that was just about Charlotte's husband, if I'm honest) but on the whole there was a lot (a LOT) of Bronte memorabilia that I really think is worth seeing for any Bronte fan. 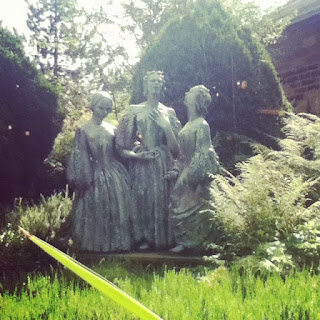 Also there's this creepy-ass statue that I really don't think we need to talk about.

I learnt a lot of new things about the Brontes at the Parsonage, most of which I've now, predictably, forgotten, but one thing that sticks out is this: While all the Bronte siblings are buried in the church, (which we weren't allowed to go in because they were doing building work on it- hmph!) Anne is not because she died in Scarborough, and Charlotte had her buried there because she wanted to save her father the heartbreak of having to bury another child. Which is all very well and good, and I know it doesn't actually make much of a difference, but... It sort of makes me want to cry because I think of Anne being all alone where she's buried, and... *sniff*. 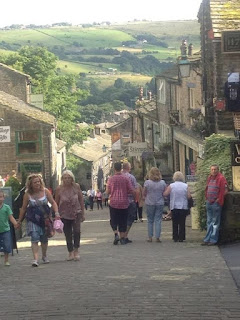 Quick tourist's guide to Haworth- it's lovely and the shops are all set on this MASSIVE HILL which is fine to walk down, but a lot more effort to get back up (as is the way with hills...) but since it's Yorkshire (and please ignore anyone in basically any Bronte novel, Joseph in Wuthering Heights I'm looking at YOU) the people are so lovely and friendly that you don't even care that you can't breathe as you peruse the shops. A word to the wise: if you go to Haworth on a Monday (as we did) everywhere closes at six and some places don't even bother to open. THIS INCLUDES RESTAURANTS. So good LUCK getting fed- we went to this pub that has allegedly stopped serving food (at 6pm! On a Monday!) and where everyone kind of looked like they wanted to kill us, thus making themselves the exception to the 'friendly Yorkshire people' rule! We did eventually get fed in a hotel and it was fine, but my advice to you is this- make your trip to Haworth a day trip, and clear off out of there by about 5pm. So you can get fed somewhere.

So that's what happened in Haworth. Hopefully this will be useful to someone out there planning to go on a Bronte pilgrimage, but if not then... This is what I did in my summer holidays! It was aces! And I'll say about the only thing I've said for the last few months: I LOVE Yorkshire!
Posted by Laura at 09:59