I think we all appreciate that a good readathon takes a lot of preparation and compiling of books and shuffling of papers and all that kind of stuff. I don't even know what I'm talking about right now, but tomorrow is Dewey's 24 Hour Readathon, and look! A pile of books! 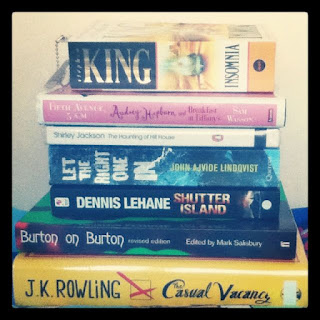 When I made this pile, I thought wistfully back to the me of about a year ago who put EIGHTEEN books in her first readathon pile like that was a viable number of books to read! This is definitely more do-able, and I'm still definitely not going to read hardly any of these, obviously. But it's good to have options!

So, allow me to elaborate on ze books. Starting from the bottom there is:

I haven't even thought about snacks because I'm assuming that I'll just mainly have, you know, meals tomorrow, but I believe my mum will be buying hummus, and obviously there will always be diet coke, and really, what more do I need? Nothing.

And now, for a story. Yesterday I was washing up in the kitchen when my dad came in brandishing a parcel at me, about which I was VERY excited because, hey! I hadn't ordered anything! So I obviously opened it where I stood, and found the following: 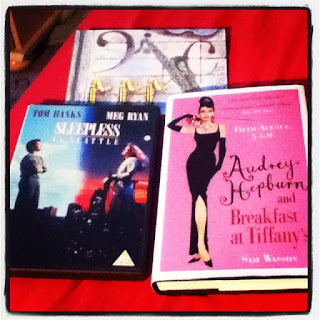 With a helpful explanatory card from Bex saying that she sent me these goodies (these very very good goodies!) as a thank you for making her baby some hats, and cause I've been having a kind of rough time lately; and I was BOWLED OVER. Like, seriously. Ugh, she's such a lovely, and now everyone knows about it, and you all can know that I LOVE her, as well. (I mean, I already did! But this is like an extra mile of loveliness).

SO! Thank youuuu Bex! Again. And until the END OF TIME.

And that was that and it was the best, and now I get to read ALL day tomorrow, and that's going to be the second best. Pretty awesome, I think you'll agree.