Devouring Books: Tolstoy and the Purple Chair by Nina Sankovitch 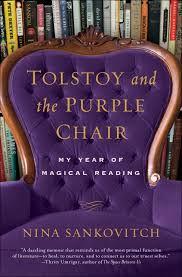 "The whole world should tremble and shake at every death, but if it did, we would never be still. The world would literally rock with death and sorrow. How is it that we hold on to the shell of the earth and of our lives, and go on?"

For some reason, I've been obsessed with Tolstoy and the Purple Chair for the longest time. I think it's been around since juuust about the time I started blogging, and apparently I'm really suggestible just by seeing the cover of a book, if it's a good cover (it doesn't hurt that I read Anna Karenina not long after I started blogging, and, I don't know, I really like purple? And chairs, obviously) and obviously I decided that I MUST read it. And so, 2 years later, I did! (Huge thanks to Hanna, who sent it to me!)

And. Well. I didn't love it. I liked it fine, and I did read it in, I think, 2 days, but it really is pretty short, and reading a book about someone who's reading a book a day (ooh, meta) does sort of get you in the mood to, I don't know, compete with Sankovitch and at least read this book in a day (and a bit)? Although that might just have been my reaction to it all. I'm pretty sure that when I first heard the concept, 'oh yeah, she read a book a day for a year' my reaction was 'cool!' which is pretty far from what my reaction should have been, which is 'what a crazy!' because, if you think about it, that's a pretty consuming, almost life ignoring goal.

Which, to be fair, is something that I think Sankovitch appreciates and admits to, but she thinks that the positives of reading a book a day for a year will outweigh the negatives, and besides, it's something that she needed to do to try and reconcile herself with her sister Anne-Marie's sudden death. My thoughts on the grieving process are, essentially, if you need to do it then do it, and that's kind of what Sankovitch did. But then, my question becomes, did I really need to read a book about it, and was a book about it any good?

Well, yes and no, to the 'any good?' question. I liked it when Sankovitch was talking about specific books and what they meant to her, and I appreciated that she tried to tie in lessons she'd learnt from books to things that had happened in her life, and things she was going to do with her life, because, you know, that's the whole point of books! There were also a few books that she'd read that I actually own, and her enthusiasm about them has really made me go 'oooh! I want to read it now!' which is really awesome, actually.

But, and I really feel like a douchbag saying this, but there were points where, when it came to her sister, she became really repetitive. I'm not saying that I don't care about her dead sister, and I can't even imagine how awful, how much of a shock it must have been to have her sister die so suddenly. But...I didn't really need her repeating, in basically every chapter, that her sister was the greatest person who ever lived. I understand why she feels that way, and I think death makes people very difficult to be objective, but it's basically impossible for a person to be as perfect as Sankovitch says her sister was, and more than that, it's kind of dull to have it pressed upon us AT ALL TIMES that she was amazing. I got that after the first chapter, I didn't really need to hear it over and over again.

To be slightly less, um, MEAN TO THE DEAD, I have to say that, in the end, I felt a tiny bit cheated by the reading challenge (if that's what you'd even call it) itself. I had kind of assumed that Sankovitch read a full sized (ish, I'm not saying she should have read, like, The Stand every day or anything) book every day, but practically all the books she read were pretty teeny, or they were novellas, or short stories. Which, you know, makes sense because she was also writing a blog and so had to have thoughts about these books and then write about them etc etc, but... I kind of thought it was more of a challenge than it actually was, and so yeah, I felt a little cheated!

So. As far as books about books goes, it's maybe not the amazingest, but I still liked it plenty (see: reading it in two days) and there are some good insights about books in there, mixed up with many, many complimentary paragraphs about her sister. It hasn't exactly inspired me to read a book a day for a year (I once read 3 books in 3 days and it nearly KILLED me) but I appreciate knowing that it can be done, and yeah, books are the coolest. Maybe you should pick one up sometime.

SPECIAL OFFER! Since Hanna sent this to me cause she's lovely, I thought I'd see if anyone else maybe wants to read it? Let me know in the comments if you'd like it, and I'll see what I can do (i.e. I'll send it to one of you because I am passing on the love).
Posted by Laura at 08:00