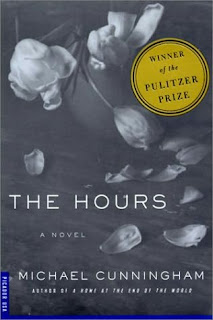 The Hours is probably one of the first books I read that made me really really feel- I guess up until whatever age I was when I read it (don't ask me when it was, I don't have a clue!) I'd always always loved reading, but it had been mostly limited to children's and teen books (Babysitters Club and Sweet Valley High foremost among them) that were really easy to read and really enjoyable, but in their simplicity offered little in the way of real rewards. The Hours was something else- just amazing writing, easier to read than I thought it would be, but also brilliantly complex. It has remained one of my favourite books since I first read it, and that was a long time ago now.

So, obviously, it's practically impossible for me to talk about.

I know. It's ridiculous, but I always get like this. When I was obsessed with Nirvana, it was really difficult to talk about with anybody, because the words I could say about them didn't come anywhere near to expressing the way they made me feel. It's only now that I can look back on it a bit and go 'damn, I really loved them you know?!' Spiritual awakening and all. Anyway, I wouldn't say I'm obsessed with The Hours, but I just like it so much that it's difficult to describe just exactly what I like about it- if I just say 'I like the 'essence' of The Hours', y'all are just going to turn away, as you should, and run to far less hippytastic blogs. As well you should (I am a total hippy though, just so you know. Seriously.) So what can I say instead?

Well, let me tell you about my experience reading it this time around. I read it for the 24 hour readathon (so... I write posts really quickly after I read stuff) and I do believe it's the first time I've read it all at once. It was nice, although it obviously felt a little bit rushed, as is the nature of readathon reading. But here's a new thing I noticed about it- it has some really clear parallels to Angels in America (loving life in spite of the awful things that happen in it, AIDs, stuff like that). Which makes sense, since I LOVE both books (well, play and book... whatever) and obviously subconsciously my love of The Hours meant that I was destined to love Angels in America. So it was good to know that I'm at least consistent in the literature that kind of changes my life, and that Cunningham obviously admires Angels in America as much as I do.

Much about The Hours is pretty original though. I love the entire structure of taking three women, one of whom is a famous author, one a bored housewife and dedicated reader, and one who is essentially a homage to Mrs Dalloway (side note: I read Mrs Dalloway purely as a supplementary text to The Hours. I like The Hours a lot more, blasphemous as it is to say...) and showing a day in their lives. Obviously it's not just any day, and for all three it represents a turning point in some way- it's not necessarily the most significant day of their whole lives, but I think for all three, it has some effect on the way that they end up.

And it's just wonderfully written, and everything about it is the best, and even though I fear that it's another one of those things I like that other people might find pretentious (American Beauty, I'm looking at you) I just really couldn't care less. Because it's beautiful. And so, because I apparently can't talk about it in any coherant way, here are some words from it that I especially like. They can probably speak for it better than I can anyway.


"Still, she loves the world for being rude and indestructible, and she knows other people must love it too, poor as well as rich, though no one speaks specifically of the reasons. Why else do we struggle to go on living, no matter how compromised, no matter how harmed?"

"She, Laura, likes to imagine... that she has a touch of brilliance herself, just a hint of it, though she knows most people probably walk around with similar hopeful suspicions curled up like tiny fists inside them, never divulged."

"She does not want, not at all, to be the strange woman, the pathetic creature, full of quirks and rages, solitary, sulking, tolerated but not loved."

"When she thought of someone... losing her mind, she'd imagined shrieks and wails, hallucinations, but at that moment it had seemed clear that there was another way, far quieter; a way that was numb and hopeless, flat, so much so that an emotion as strong as sorrow would have been a relief."

"There's just this for consolation: an hour here or there when our lives seem, against all odds and expectations, to burst open and give us everything we've ever imagined, though everyone but children (and perhaps even they) knows these hours will inevitably be followed by others, far darker and more difficult. Still, we cherish the city, the morning; we hope, more than anything, for more. Heaven only knows why we love it so."