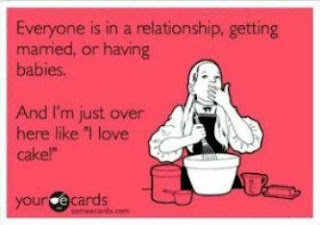 I saw the above on a friend's facebook wall this week, and, well, it's so entirely accurate that I couldn't not share it with everyone! Mmmm, cake...

So anyway, there has been no cake this week. *Sigh*. And, unfortunately, not a lot of good things either. See, on Tuesday mum woke up feeling really ill, and so antibiotics were obtained and she stayed in bed for basically all of the week and I did all the household things. This isn't really a big deal, but the big deal is how it affects me kind of in my brain, so that I'm like constantly switching between worrying about mum, and feeling stressed by all the thing that I will have to do at some point during the day. Which is a completely ridiculous thing to do, I realise, and yet it's what I do and it's very stressful and hurts my brain and by yesterday I just felt completely drained. Like, completely. And today I just feel meh (so also drained, I guess, and sleepy and still slightly stressed, even though mum's like up! And doing things! And eating and stuff! So basically I just need to get over myself.

And that was the main tableau of my week! Let's see, can I find some kind of glimmers of sunshine in it too? Hmmm... Well, there was the Once Upon A Readathon which was good because it made me read many things, but also bad because it made me slightly more stressed after each like emergence from the story, if you know what I mean? But, being in the stories? Blissful. It's weird because, whenever I feel stressed like this, I don't feel like reading, but actually reading (and the Once Upon A Readathon actually forced me to read, which I think is a good thing for how I feel at the moment) makes me feel better, so... it's an odd situation. So that was on Monday, Tuesday and Wednesday, and that was like my whole activity thing for those days (and hey, if you're looking for a post about people who've actually done stuff, this is not that, since I barely left the house this week, apart from going to the library on Monday, getting the papers every day, going to the Jobcentre [UGH] and going to Tesco yesterday. It hasn't exactly been thrilling.)

Anyway, on the bright side, books were read, so there are reviews to write and hence things for me to do this week! On another bright side, Season 5 of Breaking Bad starts tonight in the US, and so I can watch it... whenever it comes over to England, which I'm sure will be soon now *cough* cause I'd never seek it out online to watch *cough cough*. So there's a silver lining to LIFE, to which I say yay! And indeed, woo! I was trying to re-watch up to the end of Season 3 (i.e. all they have on Netflix) before it started again, but that hasn't really happened (I've got like 6 more to go before that happens... Perhaps I should marathon tonight?) so I might just watch it, cause, you know, I've got the gist of what's going down. Moral relativism and all that.

Basically now I'm just babbling, so I should probably stop that! I'm kind of sad that I have nothing more interesting/happier to say, but I don't just want to sugarcoat everything, especially to myself, and I don't want to be afraid to say that this was a rough week. Because it was, it was a rough week. I've got no solid plans for this next one (apart from this work programme thing I have to go on tomorrow that I'm dreading, and where if they make me feel bad about myself I'm so just walking out) but I'm hoping it'll be better. In all ways. For the whole week. That's a realistic thing to want, right?

Totally forgot to mention 2 things that are happening that are extremely important! Firstly, Sarah from Sarah Says Read is hosting a Summer mini-readathon (which I made her do! Well, not really. But sort of.) and you should do it because it's really fun and it's the very first readathon I did last year, and I believe there will be mini-challenge prizes, and so yeah, just go and sign up? You can do it on this post riiiiight here.

And then the other important thing is that Alice is hosting a readalong of The Moonstone! It's going to run through the whole of August, and I'm choosing to take credit for this one too, because I read Armadale, and then all the Women in White people were sad that we didn't read it together, and hence it was decreed that if we're going to read Wilkie, we're going to do it together! Note: you don't have to have read The Woman in White with us to join in. But I'm sure it helps. So you can sign up for that one over heeeeeere.

So obviously you're doing those things right now, right? Good. You keep doing that.

But, before I go, let's have another one of these shall we? I've got quite a few new-to-me-ish blogs that I like, so I might just keep doing this indefinitely- it feels nice, and I like to think it makes other people feel good too! (Note: like, if my blog is in someone's blogroll, or favourite blogs or whatever, it makes me the HAPPIEST EVER! So I like to do the same for others, share the love, you know?) So, this week's favourite-new-blog is An Armchair By The Sea. I think I'd been vaguely aware of Bex's blog for a little while, but had never really read it properly (for SHAME!) but then when I signed up to do RAK this month, and was looking for UK book bloggers to send books to (it's just cheaper! I'm not, like, never going to send a book to an American person, but this month it's all about the UK, ok?) and Bex's wishlist was on her blog, and I was like 'ooooh!' about a lot of the books on it, and so I clicked around a fair bit and just found many great reviews of great books! And this was before she emailed me and sent me a book for RAK, which a bit odd and coincidental, and also lovely! So, anyway, go and check out her blog and see the lovely things. I can't guarantee that she'll send you a book for doing so though...