BUT- I'm not going to moan in this post. Honest! First of all, I'm going to gently guide you to some internet things you may have missed this week:


I didn't really mean to be the pusher of literary links, but there sure have been a lot this week, or, I should say, a lot that I find relevant/interesting, that you might hate! So there's that.

Anyway, this week I've been ill! So surprising, I realise, but it was odd in that I had a cold, and then on Wednesday I had a MASSIVE headache which was horrible, and then that went away and the cold kind of came back. It was really weird, and I didn't much appreciate it. Plus, yesterday I GOT OUT OF BED to go to this book sale that was cancelled so that was really annoying, but on the plus side I got some books anyway, cause the place where the book sale was supposed to be? Totally charity shop laden. I got a few books, and most importantly... 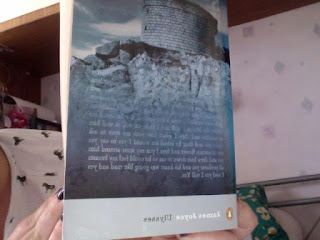 I bought Ulysses. Which, as everyone knows, is the first step to actually reading Ulysses some time in The Future. I am terrified. But it's a good kind of terror. Probably.

Anyway, I totally hid in that picture because my hair is DISGUSTING (ill! Bedrest+lack of washing=nothing good) but, by popular demand, here's a picture of my hair when it's all curly now it's been cut (this feels like a really awkward introduction to a picture, so everyone who wanted this better say nice things about it!): 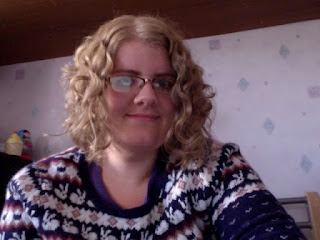 It sure is curly! (Isn't my jumper amazing? BUNNIES!) I realise my hair must just be thrilling to you, but what can I tell ya? I have no tales from this week, for it has been tale-less.

Oh, except I accompanied my mum to London on Friday for her radiotherapy session (3 down, 12 to go!) and while she went and got all... radiated, I went for a stroll down Tottenham Court Road (it's at the end of Oxford Street. In case you wanted to know) and got severely pissed off by London! I mean, normally I love it, but on Friday I got pushed in front of in a queue in a shop, nearly got run over by someone who didn't know what a ZEBRA CROSSING was for, and kindly took a leaflet from someone who, it turned out, wanted to convert me to Scientology (LOL no. That one was kind of my fault though, as I failed to spot that we were outside a Scientology centre...). And then, to top it all off I went to get a nice hot chocolate from Starbucks, and THIS happened on the cup: 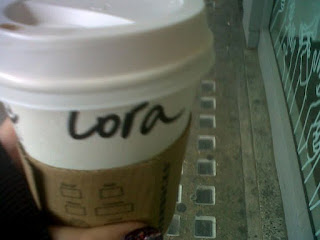 The mind genuinely boggles. And, I mean, I realise that ALL of this falls under the category of first world problems, and, to be fair, I got more stories out of a couple of hours in London than I did out of the whole week! But still... I think I've got a moors hangover, or, in other words, I think I prefer big open spaces with few people, to little cities with millions of people. At least at the moment.

OH! I almost forgot (in fact, I have forgotten. Often.) to announce the winner of my 'please take my copy of We Need To Talk About Kevin away from me' giveaway! The hat hath decreed that Alley can have it, so yay! I will be sending it to her whenever I can be bothered to go to a post office which... might not be soon. But anyway, YAY!

This week, I anticipate: forgetting to go to the post office many times, more trips to London (I don't know how many cause my mum's all like 'don't come with me, there's no point', and I'm like 'but I want to come with you in case you get all tired and stuff' and she's like 'noooo' and I'm like 'yesssss' and it's all very battle-y, so we'll see) and hopefully finishing a book, because it turns out, when I'm ill? I kind of just want to watch Daria all the time and also sleep. And ALSO to keep starting new books without finishing old ones because I'm a dumbass. Blog posting will depend on all of the above, BUT I'll definitely be posting some kind of schedule for the Grapes of Wrath readalong, so keep an eye out for that! (And hey, sign up here, if you want!)

So, I hope y'all have good weeks, and that you at least know what you're doing during them! Cause that's always a good thing.
Posted by Laura at 08:17