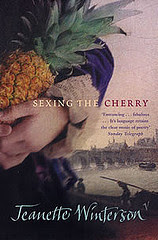 I had issues with this book. For one thing, I started reading it, I think, in July, which should give you some kind of idea how eager I was to finish it. I can't really tell you why this was the case though, which bugs me a fair bit- I just really wasn't into this book. This really disappointed me because I loved Oranges Are Not The Only Fruit, and I really was expecting this to be just as good. But it wasn't.

I think at the root of my problem with Sexing the Cherry was that, much as I love books to be profound and filled with meaning, I also like them to have some semblance of a story. Sexing the Cherry has the deep intense meanings (although I had problems with them too, which I'll get onto in a bit) but the story? Not so much. I think this is part of why I really couldn't be bothered to carry on reading it after I started it months ago, because I really couldn't feel anything for characters that seemed more like symbols than actual people I could relate to, and because really, there's no connecting story to put them in any kind of context- it's all just ideas and concepts and symbols. Not necessarily a bad thing when combined with a story that you care about and want to read, but on their own? I wasn't too impressed.

As for the profundity and the symbols themselves, I wasn't exactly blown away by them either. One of the main characters (symbols) is a woman who is huge beyond any reaches of the imagination, and I really didn't get the point of that- was Winterson trying to display the strength of women by giving her ultimate symbol of woman a huge, hulking form? And if she was, shouldn't that have been clearer? I'm not asking for all meaning in literature to be completely transparent here, but, in other areas of the book, Winterson says things that are almost too obvious to even be stated. For example, "Are we all living like this? Two lives, the ideal outer life and the inner imaginative life where we keep our secrets?" To which the answer, I think kind of obviously, is yes, and, to take it even further, the way we navigate between the two is by sharing our secrets with other people. What a revelation! Ahem.

Reading the recommendations on the covers of the book, I can't help but get an Emperor's new clothes feeling about this book. It's almost as if they have been dazzled by the 'voice' of the book, and it's 'stunning' revelations, without recognising that, actually, there's not really a story to speak of, and the revelations that Winterson offers are such that we kind of already knew. There's hardly, in fact, anything she hasn't said in Oranges Are Not The Only Fruit, and that was done in a much better way since, you know, there was actually a story and all, along with the useful observations about life that it also provides. It's not necessarily fair to compare the two, but, at points during this book, it was useful to remember exactly why I was reading this book.

To be completely fair, I did quite enjoy the story of The Twelve Dancing Princesses, rebooted by Winterson so that each princess found traditional marriages to be lacking as the kind of life they wanted, which they all remedied by leaving their husbands, some having affairs with other women, but mostly just realising that marriage is not necessarily the best way to retain their strength and independence, and not the best environment for them to grow. Even this, however, was jarring in the larger scale of the book, as it really seemed to have no connection to the rest of the story, such as it was. There was just nowhere to focus my attention, no foothold to get my bearings, and in the end I really just couldn't enjoy this book, much as I really wanted to.
Posted by Laura at 12:52