Ugh. Have you seen Carrie? It's one of those things that's a big cultural landmark, and is meant to be dreadfully scary and all, except the one thing that people are afraid to say about it is that, well, it sucks. It does. It sucks SO HARD that I can hardly bear to think about it, let alone write about it. But, alas, I can't be bothered to write any book reviews today (I have 3 to do, but I'M TIRED SO LET ME BITCH ABOUT A FILM, OK?)

So I'm assuming that we're all aware that I'm all about Stephen King, right? I can't get enough of the dude, if I'm honest; and so even though so many of the films based on his work are apparently AWFUL (I haven't really seen too many, but The Stand, which was a miniseries, was so dreadful that I felt bad for wasting hours of my life on it) I'm still thinking- well, how bad can they be? Interestingly, Carrie is meant to be one of the good ones (then again, so is The Shining: which is a technically good film that has absolutely nothing to do with the book) which makes me wonder- just how bad do they get?

Anyway, Carrie. Girl with telekinesis gets all bullied and then researches her 'powers', overrules her mother and goes to the prom where people are nice to her, then nasty girl accompanied by John Travolta (Danny, WHY?!) dumps pigs blood on her and she goes alllllll crazy. And that's literally it. All the nuances, and the deep insight into Carrie's mind, and her history of making weird shit happen is missed out. There's no indication of the combined onset of puberty and a strengthening of Carrie's powers, and, basically, everything that was good about the book is left out of the film, which just sensationalises things in a really flat and boring way.

Because that's the thing about this film, the last like 15 minutes or so aside. It's really boring. It's boring in a way the book never was, because the book had depth where the film has none. I honestly had to spend half the time I was watching the film on IMDb reading trivia about the film that was more interesting than the film itself (fun fact: in the scene right at the beginning, there are loads of gratuitously naked teenage girls [actually, everyone was in their mid-twenties, hello Grease-style casting!] and at first, no one wanted to get naked, but then when they saw Sissy Spacek naked they were all like 'oh, ok, I'll do it!' Which strikes me as really mean towards Spacek, but there you go!) I mean, I don't know if I want to blame the seventies for being a hollow and empty time, or if I should just blame this one film for doing nothing much with some good source material, but either way, just UGH.

I mean, maybe it's just me and I have an aversion to the entire seventies look of the film, but I think it's more than that- in horror films, the aim isn't necessarily for character development, but rather for a massive build up of tension before the inevitable bloodbath (in this case, anyway) that ensues. And that's fine, I suppose- if you hadn't read the book, you'd probably be easily horrified by all the shit that goes down at the prom. But horror's all about the visual, and with that you lose a lot of the deeper down stuff. Here's an example (that's also a SPOILER, so watch out!). In the movie, Carrie kills her mother by throwing loads of knives at her which correlates with an earlier image in the film of some saint with arrows in his body. It looks pretty good, but there's no meaning behind it. In the book, Carrie kills her mother by stopping her heart (with her mind and all, you know) which I take as showing that Carrie still doesn't want to hurt her mum, because really really deep down, she still loves her, after everything she's done to her. END SPOILER And even if that's not what King meant to say with that, the thing the book has done is that it's made me think about it, which isn't something I can say about any point of the movie. 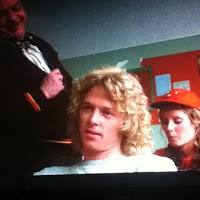 He has a fucking perm. How much more seventies do you want it to get?

Basically, Carrie is a major disappointment, at least for me, and I think for anyone who has read the book. I'm sure it can be appreciated on its own (even though it does look dreadfully seventies, which really put me off from the outset, in spite of the book of course being set in the seventies too) as a film, and good for you if you liked it. As for me... I'm going to stick to being sceptical of ALL movies based on Stephen King's horror books (since, of course, The Green Mile and The Shawshank Redemption are spectacular), until they prove me wrong. I think I'm going to try Misery next... wish me luck?
Posted by Laura at 17:29