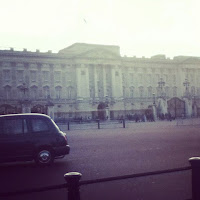 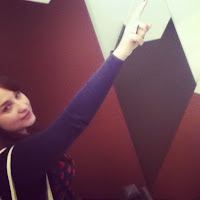 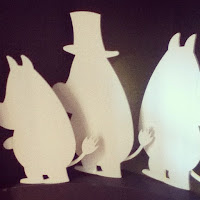 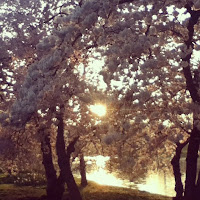 Lovely lovely Buckingham Palace, where an unelected ruler gets to live... Moomins in The Moomin Shop... Frances is actually pointing at the ever so creepy Little My, but let's pretend she's singing an inspirational song!... Blossom in St James' Park, just before sunset. Lovely.

Much to get through this week, and such short attention spans because of internet addictions to deal with. If anyone knows how to be brief yet detailed at the same time, then please let me know and I'll work on it, I promise! I adored two days of this week, three were relatively normal and fine, and one was fairly horrible, although maybe not as horrible as I'd envisaged. So I guess... I'll start with the horrid one, then build up to the two great ones and skip the three 'meh' ones? (I don't know how today's going to pan out yet, but considering it involves a trip to Wagamama, I'm going to say it's going to be pretty good!)

So, on Friday my mum started her chemo. Before all the drug pumping, we saw the doctor who told us that there was no cancer in her liver (at which I let out a breath that I didn't even know I was holding) and that it wasn't in the lymph nodes on the other side or her spleen either. There is a little bit in (or on, I'm not really sure of the specifics) one vertebrae of her spine, but that's apparently very small, and a much better place for it to have gone to than her liver. So that was a fairly positive meeting, and then the chemo started. And we were expecting it to be in a bag, and just basically dripped into her vein, but actually a nurse sat there and administered like 8 syringes of different things separately, in a tiny, really hot room. And the nurse was really nice and everything, but her presence meant that we couldn't be totally normal and just chat about things because she would have felt left out, so it was a slightly stifling atmosphere. But, that aside, everything went well and *touch wood* my mum hasn't felt sick at all and has basically just been a bit tired, but still insistent on doing things. Which I of course am doing my best to stop her doing!

So, that was that. But before that, it was like the universe knew that Friday wasn't going to be so nice, and made the rest of the week a really nice one! On Monday I spent the day in London with Frances, which was so so lovely, and even though we struggled to think of things that we actually did (we literally just wandered round the whole day and talked about nothing much) it was perfect and lovely and just what I needed! I did discover that it's extremely expensive to go into St Paul's Cathedral (£14.50! Each!) now, and that The Moomin Shop in Covent Garden is AMAZING, albeit also really really expensive (they were selling a box of matches for £4.00. Just, no. I did buy a plate and some Moomin cookie cutters though, so all is well with the world.) And I got some lovely pictures which I just had to share with you because, well, I'm nice like that!

So Monday was awesome, but I always knew it would be. The unexpectedly lovely day was Wednesday- my cousin called me and asked if I wanted to go and have lunch and go for a walk by the river, and I of course did (just, FYI, that's something I always want to do when it's sunny and gorgeous) and so that's what we did! It was awfully relaxing, and we also went to my favourite garden centre- as a 10 year old, I would have been massively upset that I even had a favourite garden centre, but now that I'm ancient (almost 23!) I sadly enjoy them a lot more! Plus this one has pets and, well, I have to live vicariously through looking at them in other places! Anyway, in the evening me and my sister went to see The Hunger Games, which was an expected thing, but she also bought me dinner which was not at all expected and very nice of her! The fact that said dinner was a chinese buffet didn't hurt either (if you've never been to a chinese buffet, I urge you to do so! My life between the ages of 16-18 was basically just killing time in between chinese buffets!)

So, yes. Lovely days to (somewhat) make up for the horrid ones. I can live with that. This coming week, I'm mainly just hoping that my mum keeps feeling ok, but if she doesn't then I'll be here to nurse her! My only plans for the week involve making my own birthday cake (I have big plans for it, so I'm pretty excited!) and quite possibly doing some easter baking! I may have to skip next week's Sunday Sundries, depending on how much easter fun I'm having (translation: how long I'll be round my nan's that day, since she doesn't have internet) so if I do, then I hope y'all have a lovely easter! Sugar comas all round, I think (oh yeah, and the joyous christian stuff- mustn't forget that...). So yeah. Have lovely weeks or maybe fortnights everyone!

OH! And I nearly forgot! I wanted to have a little quarterly check in of my challenges for the year, more for me to keep a check on how I'm doing than anything else! And, let's just say, I'm not doing fabulously! If, say, I wanted to be a quarter done at this point of the year, I think I'm failing that on basically every challenge... But oh well! There are still 9 whole months to go!

So, for the Back to the Classics Challenge, of 9 books I've read 2 (22% complete) but one of those was a play, Othello; and the other was my re-read, Jane Eyre, so that's the two easiest books out of the way! (*Mutters threateningly at self, glares*)

That's the challenge I'm doing the best in though! For the TBR Pile Challenge, I've read 2 of 12 books (17% complete, but only one book away from being a quarter done, I guess) which were The Falls, and A Short History of Nearly Everything. Both of which are by authors I adore, so weren't really challenging at all. Hmmm...

This next one I'm actually deeply ashamed of. Because from the start of the year, (and I wasn't counting re-reads, or Stephen King books) I've only read THREE books that I actually own- that's THREE unread books from my own shelves. It's seriously shameful that when I have over 200 unread books, I'm still reading books from the library, or that I've read before! Must do better. So that's 3 of 30 books (10%) read for the Off the Shelf Challenge. Bad bad Laura.

So, the moral of this story: Must try harder! And definitely must read the books I own! I am currently reading 2 books that are off my own shelves, so I'm making a real effort on that front, but the real challenge is keeping it up! Which I fully intend to do. Go me! etc.
Posted by Laura at 08:49