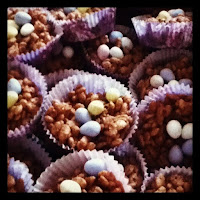 Gratuitous picture of easter cakes for no good reason...
Happy Sunday you guys! I was going to be an utter asshole and make this the longest ever post (by including my birthday IMM/Mailbox Monday in it) but I decided to save you from such horrors and post each one separately. Good luck getting through all that this Sunday!

Instead of telling you about my last, what, two (?) weeks, I'm going to show you my list of kind of new years resolutions that many many many bloggers do for their birthdays- and this year, I'm no exception! Aren't y'all so lucky! But in case you're interested in my activities for the last little while, they basically go: Easter, birthday; baking for easter and birthday; book presents (see later post); another viewing of The Hunger Games with my friend who hadn't read the books, which meant I could see it through her eyes; and wishing my sister would go back to work. NOT in a mean way- it's just that her presence at home kind of puts me all out of sync and messes with my schedule and things, and, well, don't fuck with my routine, you guys.

So. My list. I don't know if you guys have ever seen these before, because I'm not sure if you exclusively read book blogs or what- I'm fairly sure I've only seen them on lifestyle/fashiony blogs, which is what I'm reading when I'm not reading book blogs! So, anyway, it's a 23 before 24 list, and I think they're kind of cool so I wanted to do one too! I'm not sure how much off of it I'll actually get done, but, you know, it's good to have dreams! So, here it is:

23 Before 24
1. Get a tattoo
This may or may not happen. I've been saying this since I was about 18, so, we'll see.
2. Host a readalong on ze blog
Guys, you'll read something with me, right?! I'm thinking, The Grapes of Wrath? Let me know!
3. Go on a literary style trip
So so many English authors homes and things that I haven't been to! I'm thinking either The Globe or Haworth, but either way, just somewhere good. Plus Bill Bryson made me want to travel in England
(crazy, I know!)
4. Go to the cinema alone
I've never done this, maybe because I've always thought it was tragic. But going to see a film that you want to see, even if no one else wants to? Liberating, right! Or maybe still tragic...
5. Actually participate in NaNoWriMo
Remember NaNoWriMo? That thing that I signed up to do, and then just didn't? Yeah, I'm gonna try to do that.
6. Let an actual qualified person cut my hair
I haven't had a professional person haircut since February 2010 which is baaaad. And since then I've had two haircuts, one of which was administered by myself, and one by my mum. It's probably time to go back to the hairdressers, even though I feel the same way about haircuts as Nick from New Girl (I was going to have video evidence for this, but basically he doesn't like them because he has to make awkward conversation with the hairdresser which, yeah, is excruciating for me. The misanthrope).
7. Try out at least one new recipe every week
I've got a critical cookbook situation at the moment, and an ever growing Pinterest food board, soooo, yeah, I need to make some of these things!
8. Read at least 20 classics for the Classics Club
Just because that's basically the standard amount I should read, to get them all done in 5 years...
9. Make those cushion covers I was going to make people last Christmas
I've got like 10 cushion insides under my bed right now, and frankly I need the space. Ideally I'd like to do this within the next like month rather than year, but... we'll see.
10. Get rid of some books (but not too many!)
Because, well, I have too many. So, I'm thinking, read some books, get rid of the ones that suck! Easy.
11. Make people recommend music to me/be more musically exploratory
I do loves my music, but I do tend to listen to the same bands over and over. If you want to recommend me artists in the comments, that would be GREAT.
12. Go to the London Natural History Museum
Bill Bryson like peed his pants over the Natural History Museum in A Short History of Nearly Everything, and it's free to go to and I've never been so.. yeah, I'm gonna go there!
13. Watch Tiny Furniture, one way or another
I've been wanting to see it for, I swear, about 2 years now. They just released it in like one indie cinema in London, so if they haven't stopped showing it already, I so want to go and see it. This could also count for goal number 4, maybe.
14. Go to a faraway English place I haven't been to before
This shouldn't be too hard, since I've basically been nowhere in England!
15. Eat less sugar
It tastes so good, but consistently makes me feel like shit. Eating less is really the only sensible way to go. Right after I finish this Cadbury's Creme Egg...
16. Concentrate less on what other people are doing and more on what I want to do
I'm quite good at not weeping when I look at people who have jobs and things like that, but I do have comparison issues when it comes to my sister and the things she does around the house- Like, I'll be cooking dinner, which I like doing, but then I'll go 'but why isn't she cooking dinner?! That's not fair!' which is insane because I like doing it! My friend put this quote on Pinterest: "Comparison is the thief of joy", and I really just think that I massively need to remember it, and just keep on doing the things I want to do.
17. Try to keep a not-wholly negative diary
I'm not sure how much I'm going to want to remember this whole time in my life, but I think it's important to look back on my day and think that hey, it wasn't so bad after all. I've only ever used a diary to vent in before, so, yeah, could be tricky!
18. Get my tragus pierced
Or some part of my ear. I really do like getting holes punched in me...
19. Write more letters to people
20. Go to the Ben and Jerry's Sundae in the Park again
So. Much. Fun. Plus, free ice cream! Win!
21. Go to Brighton again
22. Have lots of picnics this summer
That's my main plan for the whole summer. Even though my mum did say yesterday that she hates picnics. Oh well!
23. Tell everyone that I love that I love them more often
Oh, what a saccharine end! Sorry about that! But it's still an important one, I think. There are some other goals I have that are kind of out of my control, like getting my mum all cancer free and finally finding some kind of permanent job, but following my serenity prayer awesome advice, these are things I want to happen that I have control over. (We all know the serenity prayer, right? The one for the alcoholics and stuff?) They're all do-able, I think, and I'll revisit them next year and we'll see if I've put my money where my mouth is, or whatever other saying would do here.
I'm off now to write my IMM/Mailbox Monday post, and then to read The Woman in White, of which I still have about 100 pages to read, because I is bay-d, just like Rhett Butler (we all read that in a Mammy voice, right?) Have fab weeks, everyone!
Posted by Laura at 17:15