Well hello guys and gals! I haven't done an IMM/Mailbox Monday post for the longest time, but my birthday was on Monday, and, well, I may have received some books. More specifically, I received 14 books, and then two more as Easter presents from my mum and dad. To which I say, SCORE! 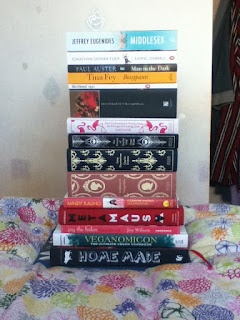 That is one joyous stack of books! So, let's go from the bottom to the top, shall we?

Right at the very bottom is Moomins Volume Three by Tove Jansson, which you can't even see because it got smooshed into the duvet! But, it's there, and it continues my little birthday/Christmas tradition of getting a Moomin book!
Just above it is Home Made by Yvette Van Boven, which is basically just this recipe book that's awesome and tells you how to make stuff like cheese and gnocchi (and loads of other stuff) from scratch, which I happen to think is fairly cool.
Next up is Veganomicon by Isa Chandra Moskowitz and Terry Hope Romero, not because I'm a vegan (at least not yet, although this whole not eating meat thing I've been doing has been going very well, thank you very much) but just because I love their recipe books, and this one looks like no exception.
Above that is Joy the Baker Cookbook by Joy Wilson. I'm a big big fan of food blogs (second only to book blogs) and Joy is basically my favourite of all, other than Natalie of Bake and Destroy who is also writing a cookbook at the moment! I'm very excited to try some of these recipes anyway.
Then there's MetaMaus by Art Speigelman, which I've been so excited to read since I heard about it like last year, because I think Maus is one of the best ever things, and I'm really interested in reading about the making of it.
Above that is Is Everyone Hanging Out Without Me? by Mindy Kaling, about whom I will say that I hadn't seen her in The Office or anything, but I did read her piece (which I think might be in this book) about stereotyped female characters in Romantic Comedies, and that alone made me want to read this. Also, I'm fairly sure she's awesome, so yeah, there's that too.
Then there are my beautiful Penguin Clothbounds (which I obviously have to get for birthdays and things because hello expensive books!) and I got Middlemarch by George Eliot, Great Expectations by Charles Dickens (even though I'm scared of Dickens), The Picture of Dorian Gray by Oscar Wilde and Alice's Adventures in Wonderland and Through the Looking Glass by Lewis Carroll. I mean, obviously they're too beautiful to read, but they sure look pretty on my shelves!
Above those (is anyone getting bored yet? I'm totally bored. I need some kind of sustenance or something *munches on an easter egg* ok, I'm good) is War and Peace by Leo Tolstoy, which is huger than I thought it would be, only with smaller writing. It's fairly intimidating, I have to admit, but I did bloody love Anna Karenina. So, yeah, I dunno.
Putting that aside for a minute (as I'm sure I shall) above it is Night by Elie Wiesel which I asked for based solely on reading excellent (albeit heartbreaking) things about it on other people's blogs. So, basically, it better be good, people who recommended it!
Above it is Bossypants by Tina Fey, which I may or may not have read in a day because, well, it was too difficult not to! Expect a review of it fairly soon. But don't expect a fairly soon review of Man in the Dark by Paul Auster, not because I don't like him, but because I have a book by him that I got for my last birthday that I still haven't read yet. Bit of a problem there!
The last two books ('the last ones already? Noooooo!' I hear you cry) I have already read, but I didn't have my own copies of, hence putting them on my birthday list. They are Eating Animals by Jonathan Safran Foer and Middlesex by Jeffrey Eugenides, and, well, I'm fairly excited to own both of them because they're both AMAZING.

Are you still reading? Well done you! Before you ask, yes I know I'm super spoilt, and yes I am very grateful! I am now in the uncomfortable/wonderful position of trying to figure out which book to read first, or how to read them all at once, but I'll calm down eventually and just go with the flow. Probably. Maybe. Yeah.
Posted by Laura at 17:49