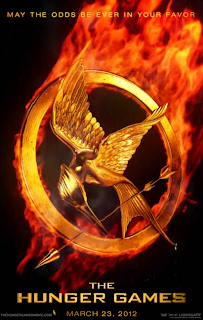 I slightly quibbled with myself over writing a review of The Hunger Games movie, mainly because everyone's doing it and, well, that's never my favourite thing. But then I figured that everyone's entering on my turf and I was reviewing films before it was even cool to review films and so there *sticks out tongue, receives slaps round the face*. But anyway. I do realise that everyone's reviewing it, so I'll try to keep what I thought about it brief. Maybe.

Let's see. Well, firstly I went to see the movie with my sister who had just finished re-reading the book, which was really annoying because any tiny little detail that wasn't right she kept going 'well, that didn't happen there', 'he's not Peeta', 'Effie's eyelashes are the wrong colour', shit like that. I had apparently forgotten all the book, which is why you shouldn't read things at about 4am during Dewey's Readathon, or if you do, you shouldn't expect to remember them. The details that bugged me the most were: that the Mockingjay pin lost almost all of its meaning, because Katniss got it for her sister and then her sister gave it back to her like 5 minutes later? What?! And also that the muttations were really just big dogs, because what happened to the most horrifying thing about them? I guess that was maybe a step too far for it to still be a 12A (or PG-13 or whatever it was in the US) but still, I didn't really find them as scary and twisted as they were in the book because of that.

But, aside from that, and the fact that the action in the arena happened maybe a little bit too fast for me (I get that it's an action film, and a pretty actiony book, but in the book there was definitely more breathing time in between events- but I guess that most of that breathing time happened in Katniss's head and that's much harder to show on film) I did really enjoy the film. I liked the fact that it was fairly bleak from the beginning, as it should be, and I was nearly crying so close to the beginning- during the reaping, in fact, just because I was like 'Katniss! You're kind of wonderful!' And I, of course, definitely cried when Rue died because UGH! Heartwrenching. What I think was best about the film though was the way that it really made it clear how The Hunger Games work from a TV perspective and behind the scenes, because you don't really get a clear impression of this just from being in Katniss's head. This way, it was almost more twisted because you could see how excited all the people of the Capitol were about these children who were about to die, and exactly how messed up the entire thing is. I mean, obviously you get that from the books too, but it's more about Katniss's will to survive rather than taking a wider look at the society within which it's set.

And, a quick note on the performances: Jennifer Lawrence was amazing as Katniss, Rue was completely adorable (don't even get me started on the racist reactions to her, I can't even..) Peeta was ok, and it didn't really matter how Gale was because he was hardly in it, as it should be! But he was ok too. I was utterly distracted whenever Seneca Crane was on the screen though, because I knew I knew him, and yet I couldn't place him, but a quick IMDb search when I came home revealed that he also played Ricky Fitz in American Beauty, to which I went DUH, as well as thinking that maybe people in your favourite movies maybe shouldn't be allowed to be in other things because it's too confusing (as in, I think he's only Ricky Fitz, he can't be anyone else!). I liked Effie a lot less in the film, not really because of her performance, but because she's part of the whole system that does this to children; but then again, so is everyone, so I can't really blame her. But I sort of did, and so I liked her a lot less.

So yeah. Overall, I was pretty impressed, and I think that, even though I bitch about people who haven't read the book before seeing the movie (most of the time) I would have enjoyed it even more if I hadn't known what was going to happen. But I did, and it was still fine, so that's all good! The most enlightening moment of the evening was when I asked my (older) sister if she'd volunteer for me if The Hunger Games were a real thing. After hesitating for ages, she said that she wouldn't because she thought I'd have more chance of surviving than her, to which I say HA, and errr no. But still, I guess I'd be in them on my own then! I'm trading my sister in for Katniss any day now...
Posted by Laura at 15:26