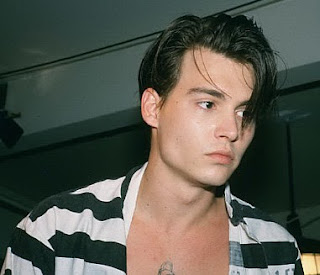 I didn't have enough instagram pictures to do a little montage this week, so instead here's a young Johnny Depp! This has nothing to do with the rest of the post, but it sure puts a cherry on my Sunday...
So, this hasn't been my favourite week ever. Which means that this post is probably going to be pretty short! (Cue cheers and applause from the masses) In spite of involving way less hospital time than last week, (my dad came out on Wednesday, and proceeded to be really really whiny) I just haven't had a massively happy week. Most of it is down to feeling massively unappreciated, a bit is down to neither of my parents being able to hear because they WON'T GO AND GET THEIR HEARING TESTED AND GET FREAKING HEARING AIDS, and goddammit, I really hate repeating myself; and a bit is probably just the fact that it isn't spring yet, and oh LORD has it been dull here! All of this has basically equalled a lot of self-pity and whinging all round (and by all round I mean, in my brain) and so, really, I can't wait for this week to be over.

Lets see... things that are good that happened this week. Well, I finally found out who killed Laura Palmer in Twin Peaks! Yesterday afternoon, I literally just went to bed (I've got a cold and a cough at the moment, so I think that's ok...) knitted my mum a hat because today's Mother's day in the UK, and watched Twin Peaks for about 4 hours. I really didn't mean to do it though! It was just getting more and more intriguing, and then I, as the audience found out who the killer was, but I had to wait for Agent Cooper to figure it out, and, well, it was somehow evening and I hadn't moved for hours! It was pretty amazing. It was also pretty scary, and made me a little bit scared walking up the stairs in the dark, and also I had a moment where I was in the kitchen making the dinner and facing away from the door, and my mum came in behind me and, well, I screamed a little bit when she spoke. I realise this isn't that remarkable a story, but I'm normally relatively calm and unflappable so, yeah, I was a little flapped!

What else happened this week that was good? Well, I went shopping and bought some of my own birthday presents (joys of being older and having ill parents- having said that, at least I won't have things I don't want!), mainly from Lush- I am a complete Lush-aholic, and if you've never tried anything of theirs, please allow me to recommend The Comforter Bubble Bar, which smells like blackcurrant and just makes the most delicious baths EVER. So yeah, definitely got one of those... And a few (a lot) of other things too!

So, yeah, a few bright spots in a week that was mainly miserable. Not so shabby, I guess. My aims for the coming week are to be not so miserable, and to do many enjoyable things! I've heard whispers of a lunch outing, and my sister's dancing and things on Saturday and I'm going to see that, which should be fun/ possibly funny if anyone falls over or something! This is fairly cruel of me, I realise. I've also got a few things to sew that I'm going to get right onto (HA) and I'll probably finish watching Twin Peaks because, hey, that's my favourite thing to do at the moment! Reading-wise, I've finally got it down to just one book (Little Women) although since that's a Penguin Clothbound copy and I clearly can't take it anywhere OR in the bath, I'm going to have to start another one too. I'm thinking a Bill Bryson right now, but I'll let you know. Or I won't. Whatever.

I hope you all had much nicer weeks than me, and enjoy the beginning of Spring! (That's Tuesday, in case you didn't know). And because it's definitely not obnoxious to go on about ones own birthday all the time, there are a mere three weeks and a day until mine! Oh lord, the excitement; which is mainly tempered by the pile of presents that are still on the table downstairs because my mum can't be bothered to out away somewhere, and which I ordered myself anyway... DAMN this getting older thing (again).
Posted by Laura at 16:37