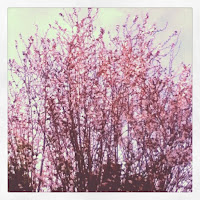 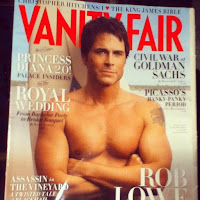 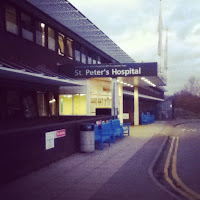 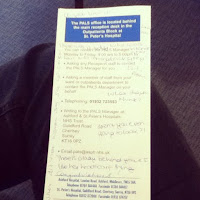 Took many many pictures of blossom... Caught up with some old magazines (the Rob Lowe Vanity Fair is from May 2011)... Went to this hospital many, MANY times... Passed notes in the hospital waiting room with my mum and auntie like we were all school girls.
So, yes. Not the most exciting of weeks, but I haven't had too many of those lately anyway! Let's see, I'll get the medical stuff out of the way first, shall I? Dad went into hospital on Tuesday to have his procedure done, it didn't go spectacularly and he got an infection but he does seem to be on the mend now, and hopefully he'll be home early this week (no one's said he will be, but I've decided it will be so in my brain). So, I've been to the hospital every day this week apart from Monday (I miss Monday!) and on Friday I got to go twice! To different hospitals! The excitement was palpable, I have to say. So, my mum had a consultation with a consultant, wherein she got her chemo start date (30th March) and we were told there were 'grey areas' on her CT scan, which sound kind of worrying, but which also we don't know enough about to go jumping to any conclusions. The doctor we saw was really nice and reassuring anyway, so it wasn't too horrible an appointment.
In other news, I've been inordinately excited by all the blossom that's been happening, especially because last week I was worried that all the horrible rain and wind had blown it away! I went on two fairly long walks yesterday and today, and on both of them I took waaay too many pictures of blossom. What can I say- I really really like spring! Probably mainly because hey, my birthday's soon (4 weeks tomorrow, oh LORD the excitement) but also because it's warm but not too warm, and oh! The pretty plants and the baby animals! So obviously, needless to say, I've mostly just been sitting inside, reading old magazines (I'm up to October in last years New Yorkers, and let's just ignore the super old Vanity Fair and pretend I didn't buy this month's even though I HAVE NO MONEY and STILL HAVEN'T READ THE ONE FROM MAY) and watching Twin Peaks, which is the BEST/most eighties thing ever, and will probably be the subject of about 20 blog posts when I'm finally done with it. So anyway, yeah- definitely making the most of the season...
So, blah blah blah, boring life, did some shopping, saw my nan a few times, saw my mum all the time, neglected my household duties so that tomorrow I need to do washing and hoovering, and I need to change my bed and make a costume for my sister's dancing shows, which start on Saturday... All the exciting things, all the time, basically! The really exciting stuff was all on here though- I posted like three book reviews and a movie review this week! And joined the Classics Club, because it is AWESOME and I have many many classics on my shelves that I haven't read yet. But anyway, much blogging was done, and it made me happy. On Thursday afternoon/evening, I actually sat down and wrote like 5 posts one after the other, which was like the most productive I've ever been, and means that I've already got a book and movie review to post this week, which is so exciting for all of you, I'm sure! (Don't lie, you know it is.)
Other than that, the week's looking like this: more hospital visits until they release papa, a shopping trip to procure mothers day presents and my birthday presents from Lush (SO exciting...), and I've got three eggs that go out of date on Thursday, so I'm thinking that something must be baked. As for reading: I really really really want to read Julius Caesar before Thursday so I can post a review on Thursday (look it up if you don't know why) and I'm also reading three books for which I have very specific reasons- A Stephen King for hospital visits because it's hard to focus on other things, Little Women for most of the rest of the time, and then Freedom by Jonathan Franzen, which is basically just my bath book at the moment- I can't read Little Women in the bath because it's a Penguin Clothbound so I don't want to get it even the teeniest bit wet! I realise this is way too many books, so I'm thinking I might have a little Stephen King rest after dad comes home and then I'll only be reading two books at once! Yay?
So, that was the week. I hope you had a more interesting one than me! Any exciting things to tell the girl with the boring life?
Posted by Laura at 21:56